🏛 A win for parents in our highest court

🏛 A win for parents in our highest court

Yesterday the U.S. Supreme Court issued a big win for parents! While it’s not the long-awaited abortion decision in the Dobbs case which we are anticipating this week, it is a big win for parents, for school choice, and for religious freedom!
The State of Maine offers a tuition assistance program to parents who live in a remote part of the state in school districts that are too small to have a high school. Under that program, parents designate the high school they would like their child to attend, and the school district transmits payments to that school to help defray the costs of tuition. Maine has limited tuition assistance payments to “nonsectarian” schools. Parents who sought tuition assistance to send their children to two different Christian schools sued the State of Maine because the ban on religious schools violated the Free Exercise clause and the Establishment Clause of the First Amendment. The lower courts ruled against the parents.

Yesterday, the U.S. Supreme Court reversed the lower courts and agreed with parents.

The Court ruled that disqualifying certain private schools from public funding “solely because they are religious” is indeed a violation of the First Amendment. The Court ruled:
“Maine’s ‘nonsectarian’ requirement for its otherwise generally available tuition assistance payments violates the Free Exercise Clause of the First Amendment. Regardless of how the benefit and restriction are described, the program operates to identify and exclude otherwise eligible schools on the basis of their religious exercise.”
Our sister organization, the Institute for Faith & Freedom filed an Amicus Brief in the Carson v. Makin case last September, because we understood that a ruling for religious freedom and school choice in the Maine case would have an impact on North Carolina’s school choice programs. In the brief we argued:
“Individuals are free to believe religious doctrine, but increasingly coerced not to act on those beliefs in public life. ‘Even today . . . people of faith are made to choose between receiving the protection of the State and living lives true to their religious convictions.’ Such censorship cuts against the Constitution’s guarantee of the right ‘not just . . . to be a religious person, holding beliefs inwardly and secretly’ but ‘the right to act on those beliefs outwardly and publicly.’”
North Carolina is embroiled in yet a third lawsuit filed by anti-school-choice and LGBT groups challenging our Opportunity Scholarship program. This time, the issue their lawsuit focuses on is the fact that Opportunity Scholarships, which are funded by taxpayer dollars, are given to parents, some of whom choose to use the scholarship dollars at private religious schools that follow Christian principles about sex, gender, and marriage.

This is but one way that we constantly represent you before government bodies every day. By filing Amicus Briefs on issues affecting North Carolina, we represent you before the U.S. Supreme Court. Last year we filed ten Amicus Briefs, and we’ve already filed three this year. All of this has been made possible by your support of efforts like ours to amplify the coalition's voice across the branches and boundaries of your government. 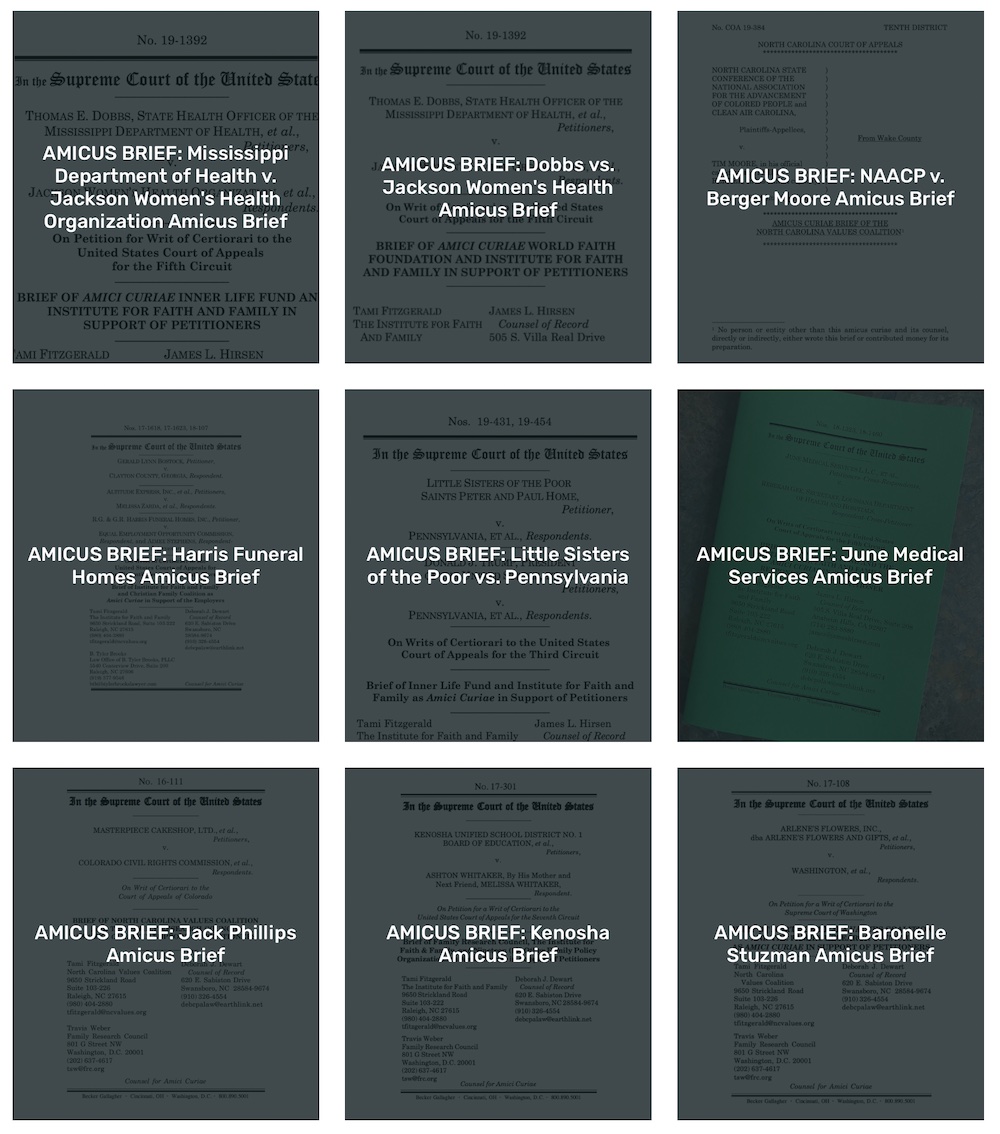 (Check out these examples of some of the amicus briefs we have filed.)

Friend, if you haven’t given yet this quarter to the work of the NC Values Coalition, I urge you to make your donation today. If you’ve given already this year, we hope you would consider also making a donation to IFFNC in gratitude for their hard work making us 'friends of the court' by writing, filing, and filing dozens of amicus briefs.