Earlier this week, respected pollster Rasmussen released the findings of a poll which asked the American public how many genders they believed existed. Their question was simple: "Do you agree or disagree with this statement: There are two genders, male and female."

The results were rather surprising, if you only listen to the woke mainstream media:

"75% of American Adults agree that there are only two genders, male and female."

This poll contrasts sharply with what Hollywood, the woke media, and radical educators would have you believe.

Everywhere you turn in our culture, activists are hard at work across disciplines attempting to convert culture and conform convictions to the LGBT agenda. As we've seen recently, they are even going as far as indoctrinating impressionable public school children in favor of advancing a LGBT politico-ideology.

Activists would have you believe that almost everyone agrees that there are more than two genders, and if you do not, you must be a bigot. While the Rasmussen poll paints a different picture, this is unfortunately the position taken by the media and society's elites; even in North Carolina. While we get to use emails like these to share with you our ongoing work, much of it often happens unreported and behind the scenes. 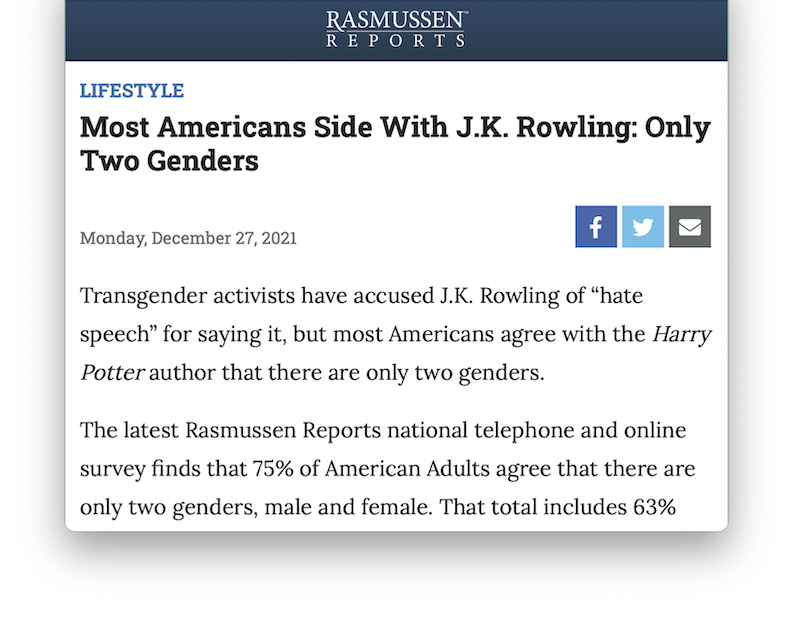 Earlier this year, we worked with legislators who introduced the Youth Health Protection Act, SB 514, in the General Assembly. The bill would protect minors from harmful transitioning "treatments" like irreversible surgeries (i.e. mastectomy, castration, vasectomy, and amputating otherwise healthy body parts), puberty blockers, and cross-sex hormones. Children and adolescents under the age of 21 are being pushed into these life-altering procedures without any scientific evidence supporting their efficacy but with a lot of scientific evidence proving they cause physical and psychological damage that is irreversible. Shame on those medical "professionals" who put social experimentation and profit above their hypocratic oath to do no harm.

During our efforts to advance the bill, we arranged for media interviews with subject expert Walt Heyer, a biological man who transitioned completely to live as a woman.  After eight years of suffering greatly and realizing he was still not happy, Walt de-transitioned and accepted his God-given sex.

After the News & Observer published quotes from the eye-opening interview, woke mobs went to work harassing the outlet with their usual bullying and name-calling. The outlet's response was to remove Walt's quotes and his story from their article, explaining to us that it was "causing too much turmoil."

Then, the woke mob went to work on Republican legislators, and shortly thereafter, the News & Observer reported:

“We do not see a pathway to Senate Bill 514 becoming law,” said Pat Ryan, a spokesman for GOP Senate leader Phil Berger, adding that “the bill will not be voted on the Senate floor.”

The newspaper reported that the bill "faced an all but certain death if it made its way to Democratic Gov. Roy Cooper." There you have it--Roy Cooper strikes again!

The majority in our state and our country still know the truth.  There are only two genders, and it is impossible to change a person's sex.  Chromosomes don't lie; science doesn't lie; God will not be mocked.

We will never give up fighting on your behalf and on behalf of vulnerable and confused children.  We need your help to continue standing for truth against this vicious delusion.  Will you help us stand up for children and their ability to grow up with the opportunity to joyfully embrace how they were born, being either male or female?

If you support our efforts working behind the scenes to defend your pro-family values throughout the year, would you consider making a needed end-of-year donation of $25, $50, $100, or more today?