Earlier this month, Houston Rockets general manager Daryl Morey sent a tweet that would ignite one of the clearest displays of corporate social justice hypocrisy of our lifetime.

In his tweet, Morey had the audacity to voice support of a protest that everyone here on the political left and right would agree to—a protest that supported Hong Kong patriots who are fighting for their political and literal lives against a greedy and authoritarian communist China. 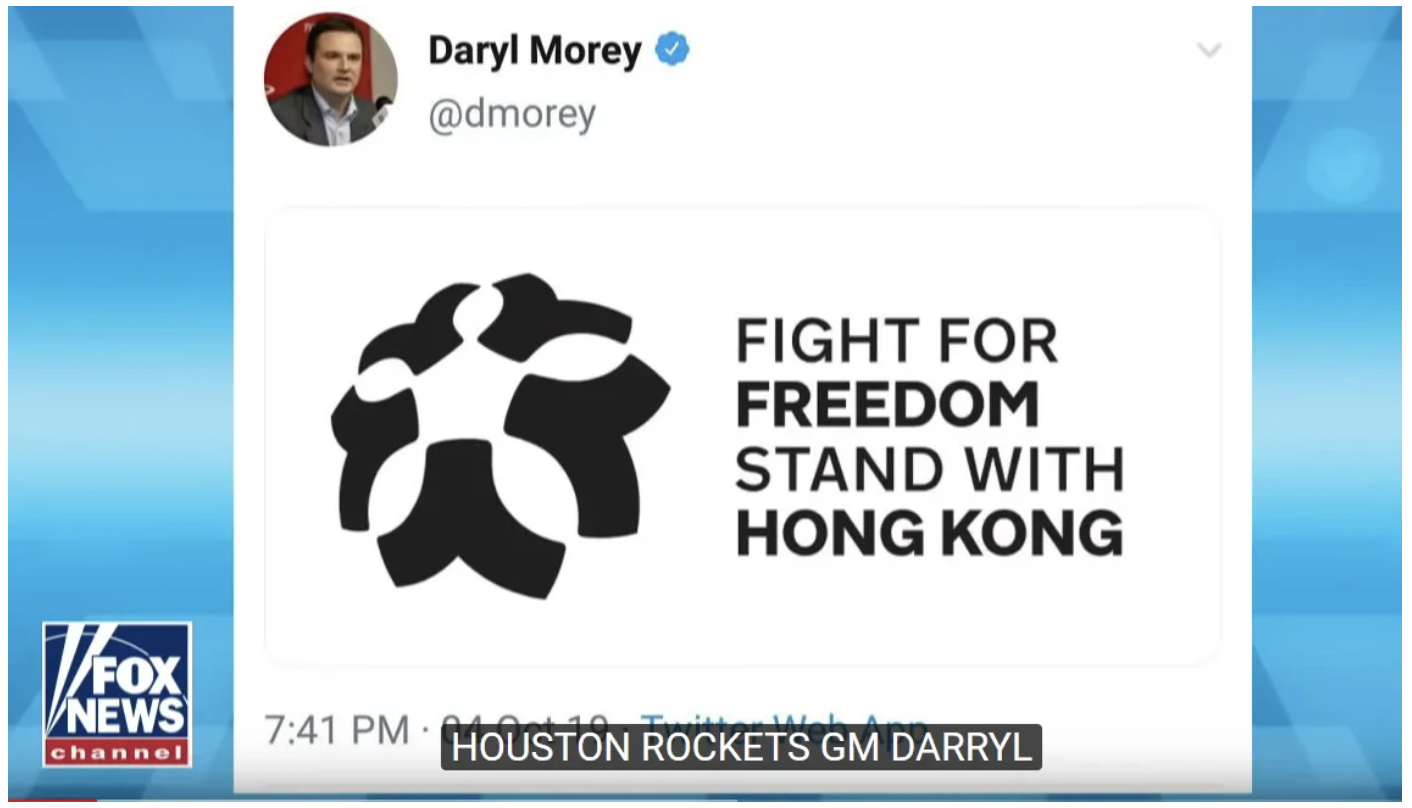 If there is any political issue that all Americans can come together on, it is that of the causes of liberty and freedom. Hundreds of thousands of patriots in Hong Kong have filled the streets, clashed with police, and waved American flags in an effort to preserve the promised rights given to them during the United Kingdom's handing over of that territory to China in 1997.

In an age where companies like the NBA have emphasized their social justice "wokeness" by going as far as boycotting Charlotte over HB2, the NBA double dribbles in grave hypocrisy.

In contrast to their treatment of Charlotte, NBA Commissioner Adam Silver came out denouncing the tweet, calling it "regrettable" and stating that it "deeply offended many of our friends and fans in China." ESPN—which has also voiced commitments to social justice ideals—released an internal memo forbidding discussion of Chinese Politics when reporting on Daryl Morey's tweet. In 2016, the NBA boycotted the State of North Carolina by pulling its NBA Allstar Game from Charlotte just weeks before the game, because it objected to our HB2 that kept transgender men from invading bathrooms, showers, and locker rooms of women.

This is the same China where just last year, the liberal publication Slate reported that in northwest Xinjang—a region where the NBA is present—the nation's authorities were holding roughly one million Muslims in concentration camps.

You could already hear the legitimate outcry companies like the NBA would make if Muslims were found in concentration camps in our state for the mere fact of their religious convictions. Yet the NBA not only continues to do business with such oppressive regimes, but even plays exhibition games and has sought to expand its markets in murderous nations like China and Saudi Arabia.

Former NC Governor Pat McCrory was right to call foul on their hypocrisy in how they handled HB2 versus China, stating: “They wanted to involve themselves with North Carolina commerce and an election, while not setting the same standard for China.” The NBA has stood with communist China in opposing the freedom sought by citizens of Hong Kong, while it boycotted North Carolina to stand with LGBT and transgender activists against privacy and freedom for women.

To make matters worse, the NBA's star players have doubled down on the hypocrisy and played right into China's hand (a China that is arguably our biggest threat internationally). Yesterday, in a tweet star player Lebron James came out and denounced efforts Like Morey's to speak out in favor of the Hong Kong protestors. This is the same player who has openly called President Trump a "bum" and stated "Going to White House was a great honor until you showed up!"

At the end of the day, this episode has made one thing very clear: social justice companies like the NBA don't really care about people's rights. They don't care about actual justice. They care about one thing: $$$$$$$$$$.

They care more about sneakers and tickets than people.

Players like Lebron are likely more worried about lost merchandise revenue, than they are about the actual oppressed individuals in Xinjang and Hong Kong who are fighting for arguably the most American and inalienable principle of justice in the history of man: "life, liberty, and the pursuit of happiness."

We hope we never forget their hypocrisy, and how they care more about their almighty dollar, than they do about the actual rights and liberties of people oppressed by real totalitarian regimes or the actual rights and liberties of women who don’t want biological men invading their bathrooms. If the NBA had a spine—and they don't—they would reverse their course and support real liberty and condemn actual oppression.

Would you please consider making a monthly or one-time donation of $5, $10, $25, $50, $75, or $100 towards the work we do fighting for your rights and liberties against hypocritical and well-funded organizations like the NBA? Our campaigns across North Carolina work towards exposing their hypocrisies, and countering the influence they try to have over our state.

Your donations make our work possible!