Sawyer Steps Over Ethics Policy to Push Support for Vote

Charlotte-Mecklenburg School Board member, Carol Sawyer, colluded with MeckPac, a Political Action Committee, to rally support ahead of tonight's public hearing on changes to the district's policy on multiculturalism. According to NC Values Coalition Executive Director, Tami Fitzgerald, "Carol Sawyer's public and unapologetic engagement with a special interest PAC clearly demonstrates she has compromised her objectivity under the board's ethics policy, and she should recuse herself. Tonight's vote is not about appreciating the different cultures; instead it is a trojan horse to smuggle in the acceptance and advancement of a political agenda which in the past has yielded results such as the Gender Unicorn, Welcoming Schools and questionable storybooks featuring boys dressing as girls and transgender crayons." 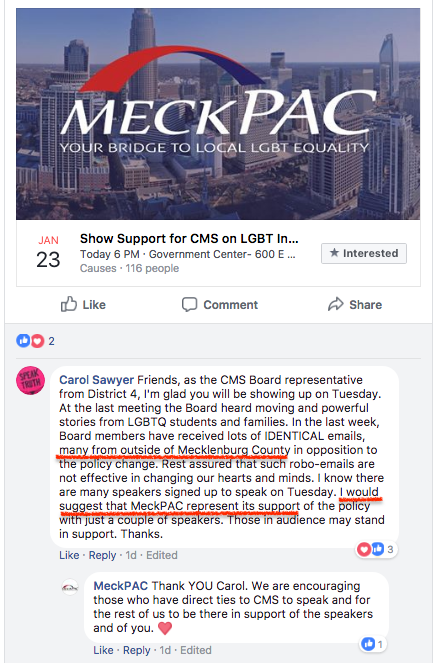 The CMS Board Member Code of Ethics clearly requires Board Members "not surrender their judgment to individuals or special interest groups" and it also requires them to "uphold the integrity and independence as a board member." However, Sawyer colluded with the very political action committee that last fall endorsed her and helped get her elected into office. As of 3pm, NC Values Coalition has sent 448 emails from parents concerned about tonight's policy and 82% where from Mecklenburg County. Only 1.79% of the respondents are from outside North Carolina.

NC Values Coalition calls on CMS board members to ask Board Member Carol Sawyer recuse to herself from tonight's Multiculturalism policy vote.