"There is no justification for any school or teacher to ask a child as young as 10-years-old about their sexual preference and gender identify. Many children have no idea what these terms even mean, and many parents object to the idea of the school either introducing these sensitive concepts or collecting data about their child with regard to them. CMS parents want to know why Superintendent Earnest Winston or the school board thought it was wise to focus on gender fluidity when 42 CMS schools are on North Carolina’s low-performing schools list. Schools in Mecklenburg County should focus more effort on core academic subjects and less time on social experimentation.  What business do schools have asking about a child’s sexual orientation or gender identity?”” 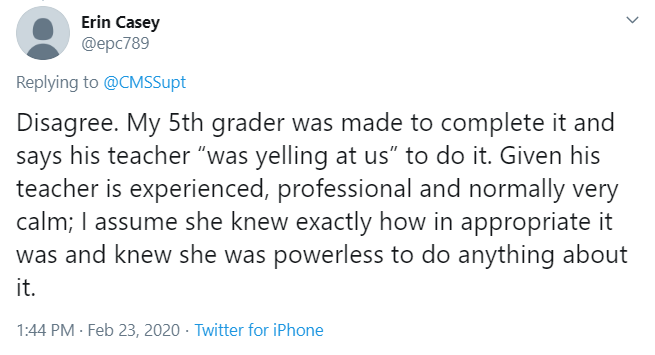 Parents should be outraged with the survey to students as young as ten-years-old. Why exactly were these three questions about gender identity and sexual preference included?  The track record is clear that CMS has a hidden agenda:

It is clear that the intention of the Mecklenburg Schools is to continue their campaign to indoctrinate the children in Mecklenburg County with LGBT ideologies.