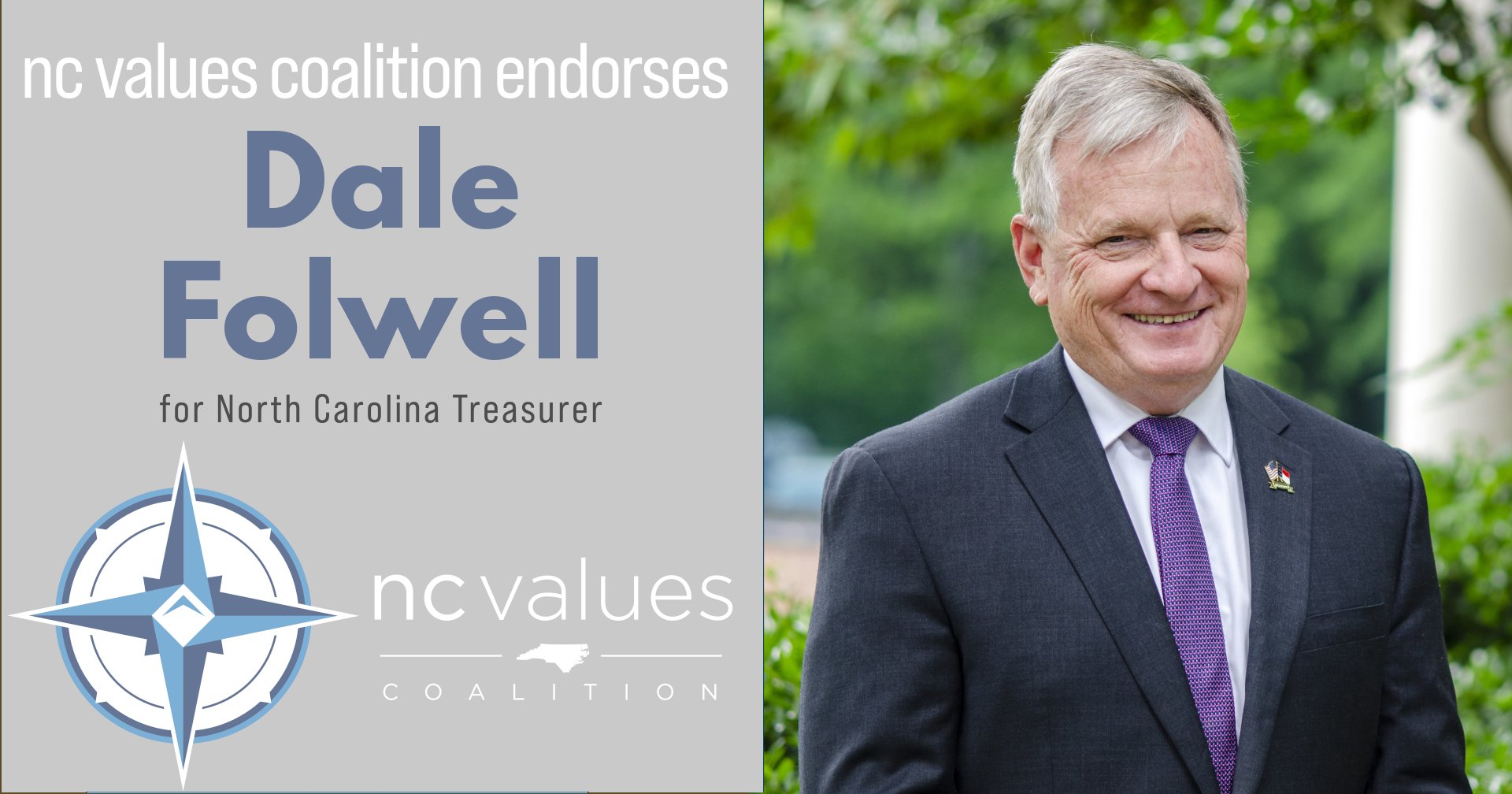 Although rarely the subject of intense political polarization, the state treasurer serves an essential role in our state economy. The office entails moderating the state’s pension and healthcare plans, as well as serving as the State's Banker, properly accounting for and reporting on all funds that are deposited, invested, and disbursed through the Department of State Treasurer. The Treasurer is essentially the “keeper of the public purse.” As you can see, the State Treasurer is integral to the financial success of North Carolina.

Current state treasurer Dale Folwell has served for the past three and one-half years. When he took over the Treasurer’s position Folwell promised the people of North Carolina that he was going to show them where their money is, who is managing it and how good they are at their jobs.

Dale Folwell started his career as a blue-collar worker, but he eventually worked his way through college, earning bachelor’s and Master’s degrees in Accounting.  He is a CPA, a “forensic accountant”, and an investment adviser. He also has a long and diverse record of public service, spending eight years on the Forsyth Board of Education, eight years in the North Carolina House of Representatives, rising to become Speaker Pro Tempore, and four years as Assistant Secretary of Commerce in charge of the Unemployment Security Division.

As State Treasurer, Folwell is responsible for a $100 billion state pension fund that provides retirement benefits for more than 900,000 teachers, law enforcement officers and other public workers. It is eight times larger than the state’s budget — the 26th largest pool of public money in the world. Folwell has done a remarkable job in office. Under his leadership, the state pension plan was rated among the top five highest-funded in the country and won accolades for “proactive management and funding discipline”. In addition, the state boasts a coveted AAA bond rating and is one of only 13 states in the country to hold that distinction.

Treasurer Folwell also oversees the State Health Plan, which provides medical and pharmaceutical benefits to more than 720,000 current and retired public employees and is the largest purchaser of health care in North Carolina. He has wrestled with the Hospital Association and Blue Cross Blue Shield, the company that manages the State Health Plan, to create transparency and reduce the cost of health care.

Treasurer Folwell called repeatedly for the Governor to remove the Secretary and top financial officers of the Department of Transportation when it was revealed that the Department of Transportation overspent its budget by $2 billion and borrowed $1 billion from the Highway Trust Fund. Those officials are now gone, as the State picks up the pieces from the mismanagement of Governor Cooper’s bad appointments. Thank goodness we have a State Treasurer who is a hawk at watching the state’s spending.

This November, Folwell is running for re-election against Ronnie Chatterji, a political newcomer and “progressive insurgent.” A professor at Duke University’s Fuqua School of Business and Sanford School of Public Policy, Ronnie Chatterji has been endorsed by EqualityNC, a progressive LGBTQ organization.

Folwell, on the other hand, is primarily concerned with being the best Treasurer in state history by managing the state’s public purse with excellence, transparency, and frugality.

In addition, when half a dozen state employees filed suit against him last year, claiming that the state health plan discriminates against transgender state employees, Treasurer Folwell defended the suit in order to protect taxpayer funds from being used to pay for gender-reassignment surgeries. One individual, a transgender man who works at UNC-Chapel Hill, complained that the state health plan will not cover breast-reduction surgery for her. The assistant athletic director at UNC-Chapel Hill joined the suit so he could force the State Health Plan to pay for expensive medical treatments for his daughter, who claims to be male. Folwell, however, says transgender medical procedures are “elective procedures” like many others that are not covered under the state health plan. “I pledged to the people of North Carolina that we would reduce the state health plan’s $32 billion debt,” Folwell said in 2016. “The provision to pay for sex change operations does none of those things.”

As you can see, it is important to make sure that the keeper of the public purse is a qualified, fiscal conservative, instead of an Obama-style Marxist pushing a liberal agenda. That is why the North Carolina Values Coalition is proud to endorse Dale Folwell in his campaign for re-election as North Carolina’s State Treasurer. He has a proven track record and a reputation for being fiscally conservative, standing firm on principle, and working hard for the people of North Carolina. He shares the values our Coalition works hard to advance. North Carolina will continue to flourish under his proven leadership as State Treasurer.