EC Sykes
for Secretary of State

For Secretary of State, NC Values Coalition announces our endorsement of E.C. Sykes: 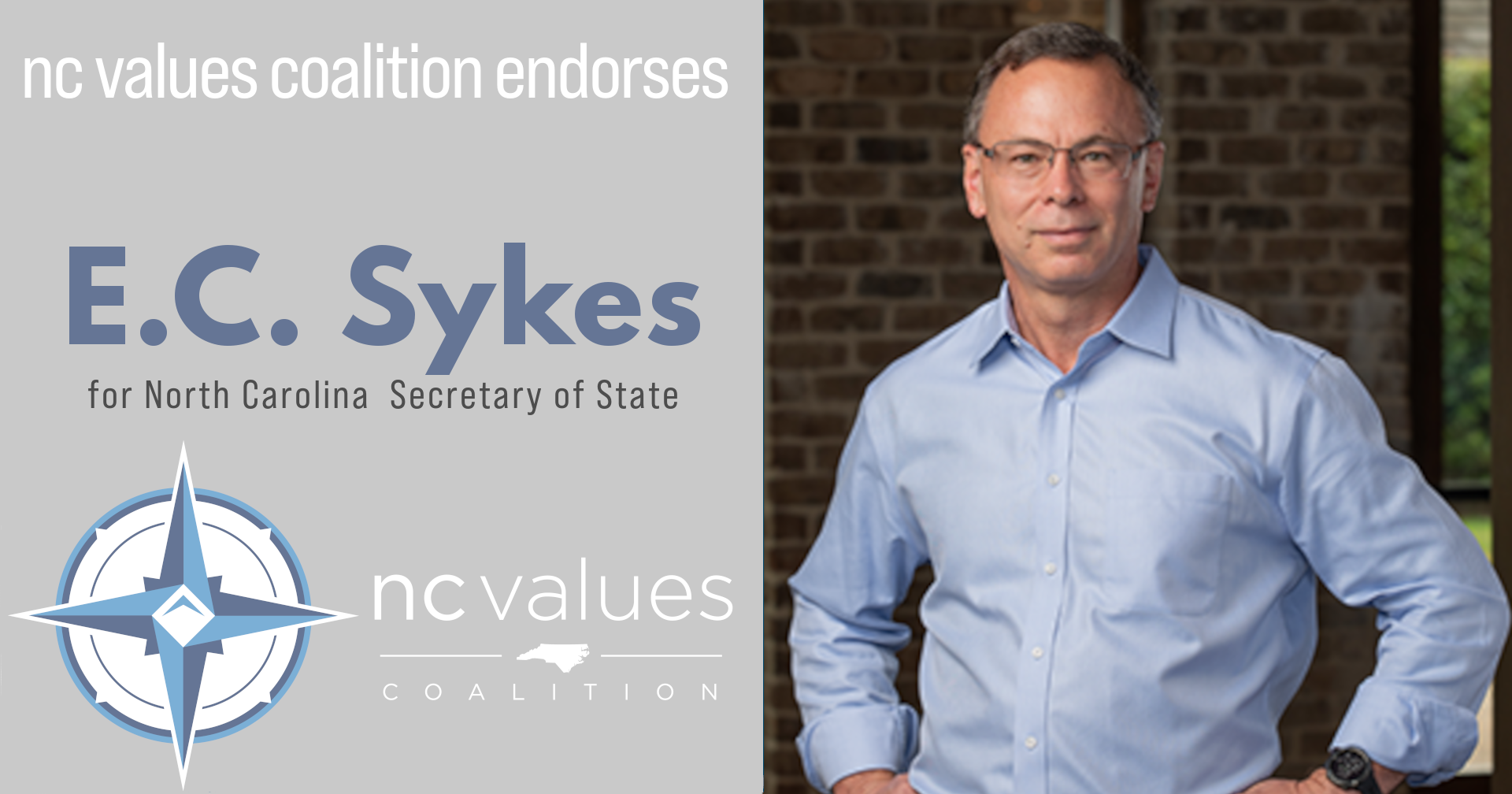 When it comes to Secretary of State, North Carolinians will face two options in 2020: a career politician with no real accomplishments after 24 years in office, or a political outsider and experienced business leader. Republican candidate E.C. Sykes has the practical experience and fresh perspective our state needs to start a new era for North Carolina businesses. Acting Secretary of State Elaine Marshall has used the office for personal gain since 1996.

As former Group President of a $25B Fortune 500 company, Sykes is no stranger to the business sector. He also worked as CEO of a small manufacturing company that was twice recognized as one of the 50 fastest-growing companies in North Carolina. His invaluable experience as a North Carolina entrepreneur, along with his ability to rise in the ranks of the business world, will provide great benefit to the office of the Secretary of State. He has the ability to deliver results and is a seasoned veteran at accountability and transparency since he reported to a Board of Directors as a CEO.

Marshall, on the other hand, has been passing time in the Secretary of State’s office since 1996. She is a career politician, working as a member of the NC State Senate prior to rising to statewide office. Twice she has tried to run for the U.S. Senate all while serving as Secretary of State. Marshall has viewed the office of Secretary of State as a mere stepping-stone. As Secretary of State, she has shown no transparency or accountability to the taxpayers. As a result, she has little to show for her 24 years in office.

Another difference between the two candidates is their values. Elaine Marshall has collected many endorsements from pro-abortion and LGBT groups, such as Lillian’s List, Planned Parenthood and Equality NC. Recently, she even received an award from Planned Parenthood.  Her campaign has received funding from Emily’s List, whose mission is to “ignite change by getting pro-choice Democratic women elected to office.” It is easy to spot the extreme left-wing ideology Marshall supports.

E.C. Sykes, on the other hand, is a champion for family values. He’s pro-life, a supporter of religious freedom, and devoted to his wife Susan and his family.  His values are true North Carolina values, and he will bring those to the office of Secretary of State.

The best reason North Carolina needs E.C. Sykes as its Secretary of State is that he has the experience and ability to deliver results for business. As a seasoned businessman, Sykes would “remove the barriers to economic growth, foster job creation, and improve the business environment.” One of the stated goals of the office of Secretary of State is to act as the heartbeat of the North Carolina business community. The office should work to support economic growth and protect businesses within the state. Republicans in the General Assembly have done an excellent job of creating a business-friendly environment in the last 10 years, reflected in the fact that for the third year in a row, Forbes ranked North Carolina 1st in the nation as the Best Place for Business. North Carolina needs a Secretary of State like E.C. Sykes who will be laser-focused on making our business climate even better by cooperating with the General Assembly and even leading the way on improvements.

Elaine Marshall, on the other hand, has been content to continue taxing businesses and collecting their fees, without much innovation. For example, Limited Liability Companies (LLC) within the state must pay an annual fee to remain in good standing. LLC’s are common because they are generally the most preferred entity for closely-held businesses. In North Carolina, LLCs must pay an annual fee of $200. Compare this to surrounding states: South Carolina and Texas do not require an annual fee. The annual fee in Virginia and Georgia is $50, and West Virginia sits at $25. The only surrounding state with a higher annual fee is Tennessee, which is $300. Marshall should be leading the charge to reduce or abolish such a comparatively high tax. The Secretary of State should be helping businesses, not hurting them.

North Carolina businesses deserve better than what Marshall has offered. North Carolina needs a fierce advocate, ready, and willing to tackle all the obstacles to our business climate. This is why the North Carolina Values Coalition is proud to endorse E.C. Sykes to serve as the next Secretary of State. Sykes will be a champion for the North Carolina business economy because he relates to the struggles and needs of business leaders. He knows what businesses need to thrive and will bring this much-needed perspective and more to the office of the Secretary of State. Additionally, he will do it with the values that we embrace—life, liberty, and family.