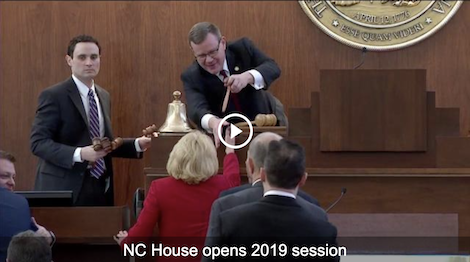 1. WRAL: After the revelation of voting irregularities, Hunt still seated in NC House

"NC Values Coalition Executive Director Tami Fitzgerald said in a statement Wednesday that the State Board is 'selectively enforcing election laws' by allowing counties to disregard discrepancies between voter and witness signature dates. Board spokesman Patrick Gannon said Tuesday that the mismatched dates "may suggest a good starting point for an investigation," but that Fitzgerald's criticisms of the board missed the mark. 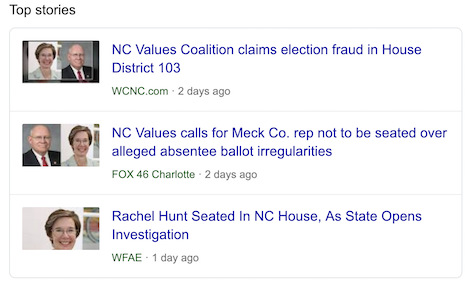 The Executive Director of NC Values Coalition, Tami Fitzgerald, stated: “The State Board of Elections committed malfeasance when it instructed county boards of elections to ignore the law clearly requiring absentee by mail voters to mark and affirm their ballots in the presence of two witnesses or a notary. At least 300 voters improperly marked and affirmed their ballots in HD-103 and NC-9 and many other ballots were improperly or illegally cast.  Many voters and witnesses involved in these irregularities have signed sworn affidavits. Proper application of the law could result in Bill Brawley’s re-election to HD103 and almost certainly would have increased Mark Harris’ lead in NC9. Given these improprieties, the negligence of the now-defunct board of elections, and the clear conflicts of its past two chairmen, it is clear that the board mishandled these two elections and who knows how many others.  The State House of Representatives should follow the lead of the United States House of Representative and decline to seat Rachel Hunt until it has thoroughly investigated this matter and determined which candidate won the most legal votes. The results of every close election in the State should be in question.”

3. FOXNEWS: The American Psychological Association has declared manhood is a mental disorder

For the first time in its history, the American Psychological Association (APA) released guidelines concerning men and boys, saying that so-called 'traditional masculinity' not only is 'harmful' but also could lead to homophobia and sexual harassment.

'The main thrust of the subsequent research is that traditional masculinity – marked by stoicism, competitiveness, dominance and aggression – is, on the whole, harmful,' reads the news release by the famed association."

The communication was first unveiled last week by a WBTV investigation.

Public records show Josh Malcolm—who was vice chairman of the NCSBE and, later, became the board’s chairman in December before it was disbanded by a court order—was in frequent contact with a man named Jens Lutz, who served as vice chairman of the Bladen County Board of Elections until his sudden resignation in early December."

LORD, we cry out to you as Father. You are a beautiful Dad. You are a model of the love, mercy, and authority of the perfect parent. We thank you for modeling for us what every parent should strive for, and for creating this wonderful institution called family.

LORD, we thank you for creating us with a basic nature designed to not be alone. Our very nature calls us into the most intimate of relationships, where we experience joys indescribable: the joys of marriage, the joys of having children; the joys of seeing our children have children. What a blessing and mercy you gave us in the family! In it we find our first teachers, our first guardians, and our first authorities.