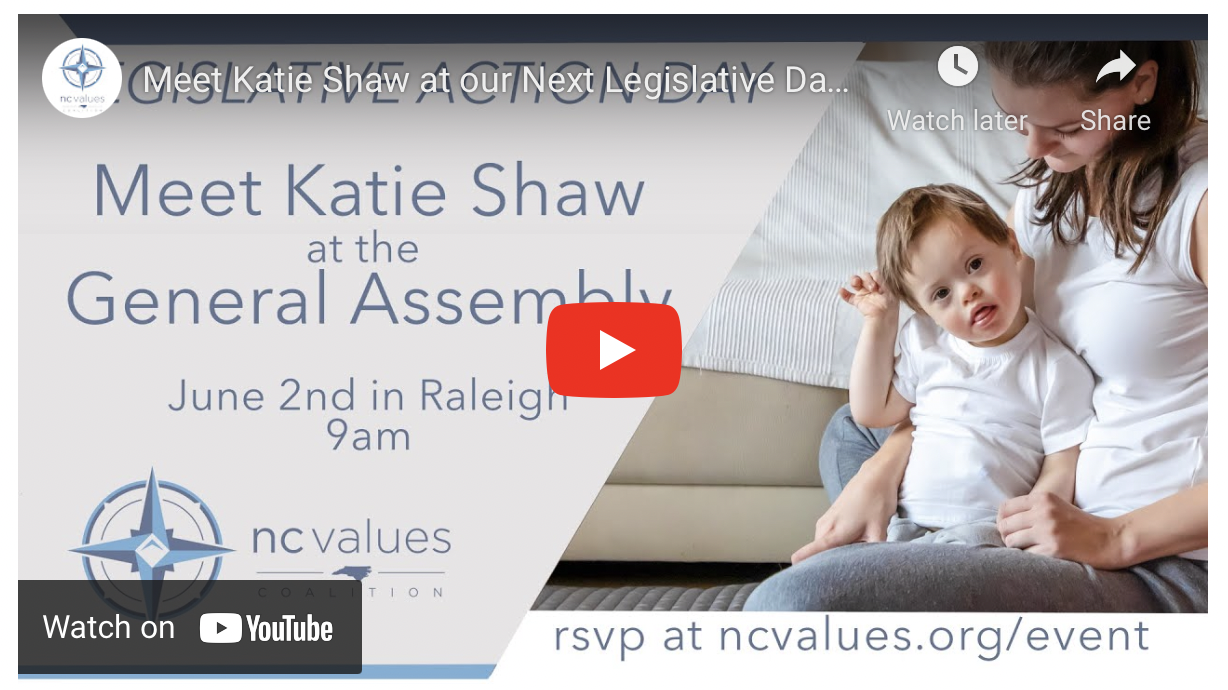 1. NC VALUES: Come advocate for the unborn with us!

We wanted to invite you to two unique opportunities to advocate for the unborn and to meet your North Carolina General Assembly members:

Legislative Day of Action with Katie Shaw (6/2): On June 2nd, we will be traveling to the North Carolina General Assembly in Raleigh to gather support for the Human Life Nondiscrimination Act (HB453). We will be supplying all of our pro-life coalition members with talking points and resources to effectively advocate for this important piece of legislation. You will also have the opportunity to personally meet Katie Shaw, a nationally known self-advocate who has Down syndrome. She’s testified on behalf of the unborn in multiple states and we are proud to welcome her to North Carolina. To learn more about this event, or to RSVP, click here.

Legislative Day of Action with CWA (6/9): On June 9th, we'll be returning to Raleigh and participating alongside Concerned Women for America for our annual multi-legislation day of action. We'll be gathering in support of a number of important bills in the State House and Senate. To learn more about this event, or to RSVP, click here. 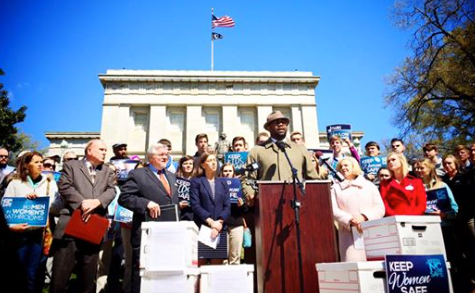 "Hindsight is 20/20. It is clear that the fight over HB2 was never about economics. The economic disaster prophesied by the LGBTQ activists and Corporate America never occurred. Businesses didn’t engage in a mass boycott of the State. While Diversity Officers pushed a public narrative, the corporations quietly purchased land, invested in infrastructure, and continued to hire North Carolina’s brightest and best university students to help their bottom line. Not one company that was doing business in North Carolina before HB2 was passed pulled out and moved elsewhere. Economic Armageddon didn’t happen. Rather, the battle over HB2 was about the perception of harm, the saber-rattling of a pubescent cancel culture, and the advancement of the LGBTQ agenda to transform American values. If HB2 had any negative impact on the State’s economy and specifically direct tourism spending, the impact was too small to be detected by all available data.

In the end, the NCAA returned. The All-Stars played. The musical artists and celebrities rebooked their shows. The activists found a new target." 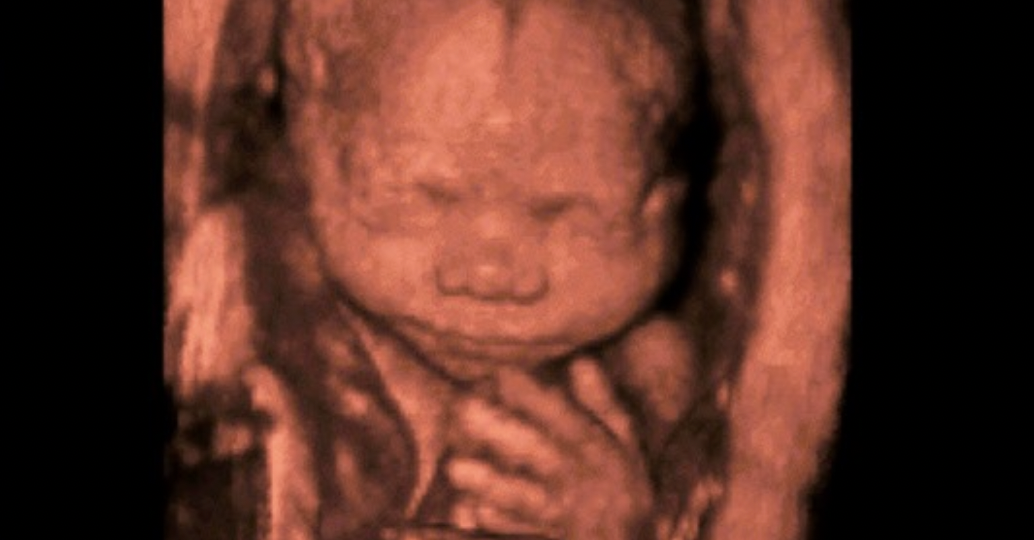 "An anti-abortion group is pouring an initial $2 million into a campaign they say will "highlight the humanity of unborn children" as the Supreme Court prepares to hear a case that critics say could undercut Roe v. Wade.

Announced on Wednesday, the 30 second ad will appear on national cable networks –  including on Lifetime, Hallmark, and Bravo – as well as the Washington, D.C. market. It comes months before the court will consider whether Mississippi's 15 week ban on abortions is unconstitutional.

'Five decades of medical breakthroughs – every age group has more opportunity, except one,' a female narrator says in the ad run by Susan B. Anthony (SBA) List." 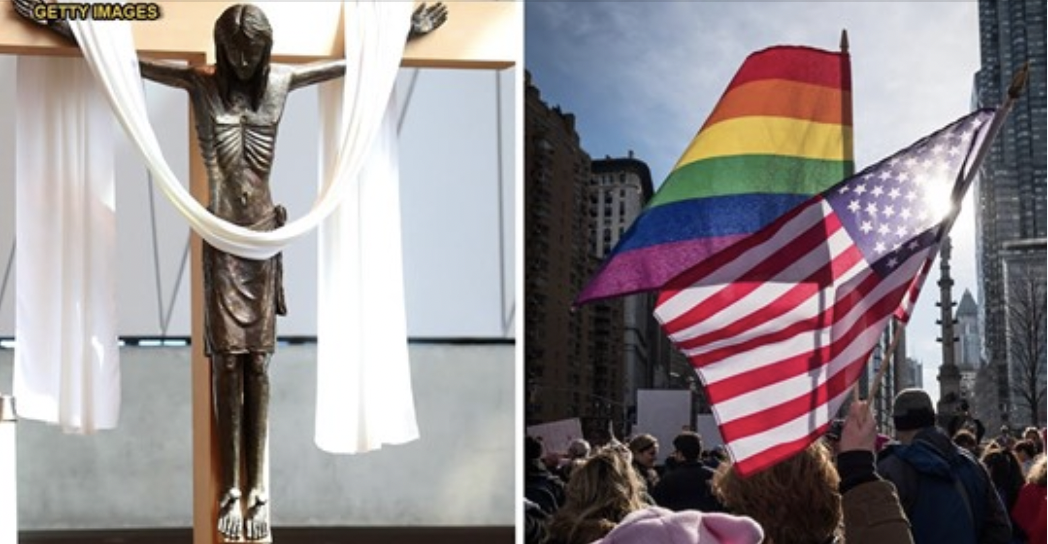 "The offices of three Republican senators [Sens. Thom Tillis, R-N.C.; Rob Portman, R-Ohio and Susan Collins, R-Maine] met with conservative religious groups late last month to ask for their help in crafting a bill similar to the controversial Equality Act, but one that includes protections for religious groups, sources familiar with the meeting told Fox News." 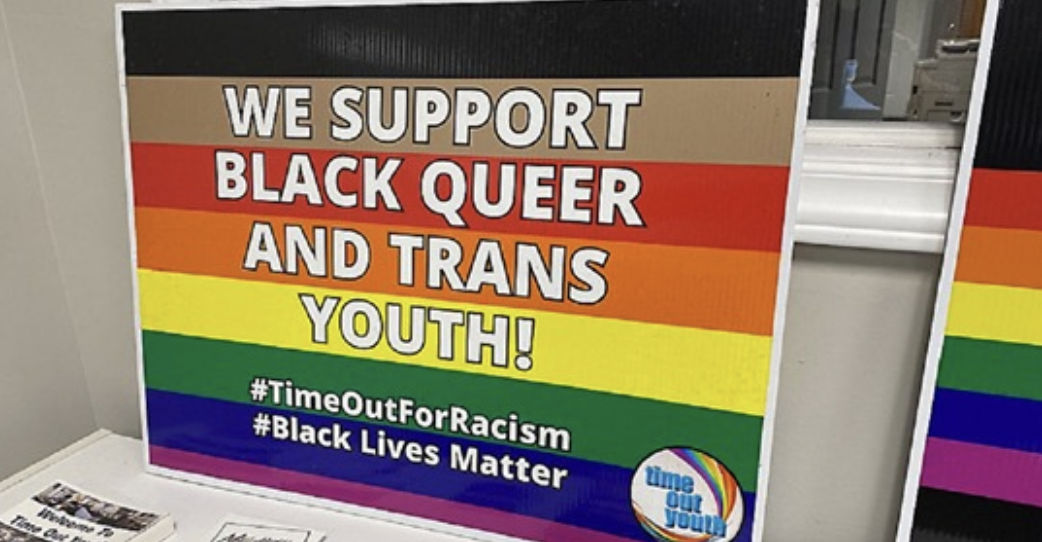 "On Monday evening, Charlotte’s LGBTQ+ leaders and allies rallied to demand the city of Charlotte pass a fully-inclusive non-discrimination ordinance. Asking for a new ordinance to include protections against discrimination in housing and other public accommodations, the groups hope Charlotte joins eight other cities and counties, which have already passed similar ordinances."

Would you take a minute and use our click-to-contact tool to tell Charlotte officials to OPPOSE any anti-religious liberty SOGI policies and ordinances?

LORD, we worship a mighty God who has the power to change hearts and minds. We lean on you as we continue to fight for the values we hold dear.

Give our leaders Your wisdom—and courage to live it out.