This week several Republican House members joined with two Democrat House members to file HB 186. This bill would repeal the privacy protections and safety of women and children in bathrooms and locker rooms.

We need you right now to take a minute to use our tool below to contact your legislator, and tell them NOT to support HB 186. Ask them NOT to cave to political correctness!

Meet Jack Phillips, a Wedding Cake baker from Denver. After refusing to violate his deeply-held Christian beliefs by baking a cake for a gay wedding, the Colorado Court of Appeals ultimately ordered him and his staff to bake cakes for gay weddings. Forty percent of Jack's business centers around weddings, so he has been forced by the government to choose between his livelihood and his Christian beliefs about marriage. 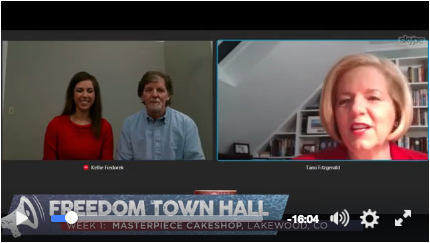 "According to the latest reports, the only one hurting from Adam Silver's announcement is the league itself. Ticket sales for the game (which was moved to New Orleans) were in the basement, analysts said before last weekend's celebration -- with nowhere to go but down. On the eve of the event, the cheapest seats at Smoothie King Center in Louisiana were $184 -- a 71 percent decrease from last year in Toronto, where fans were shelling out $644 to sit in the rafters. And if history is any indication, the plunge only got worse heading into last weekend." (Read more)

5. Southern Baptist theologian's experience as an expert witness for the Baronnelle Stutzman case.

"I had to defend not only our denomination’s statement of faith (The Baptist Faith and Message) but also resolutions passed by our denomination going back 30 and 40 years. It was hostile questioning intended to discredit what Southern Baptists believe about marriage. They wanted to discredit us so that they could discredit her. And make no mistake, once they succeed in punishing her, others will use this precedent to punish the rest of us—and not just Southern Baptists but any person who dares to act on their belief that marriage is the union of one man and one woman." (Read more)