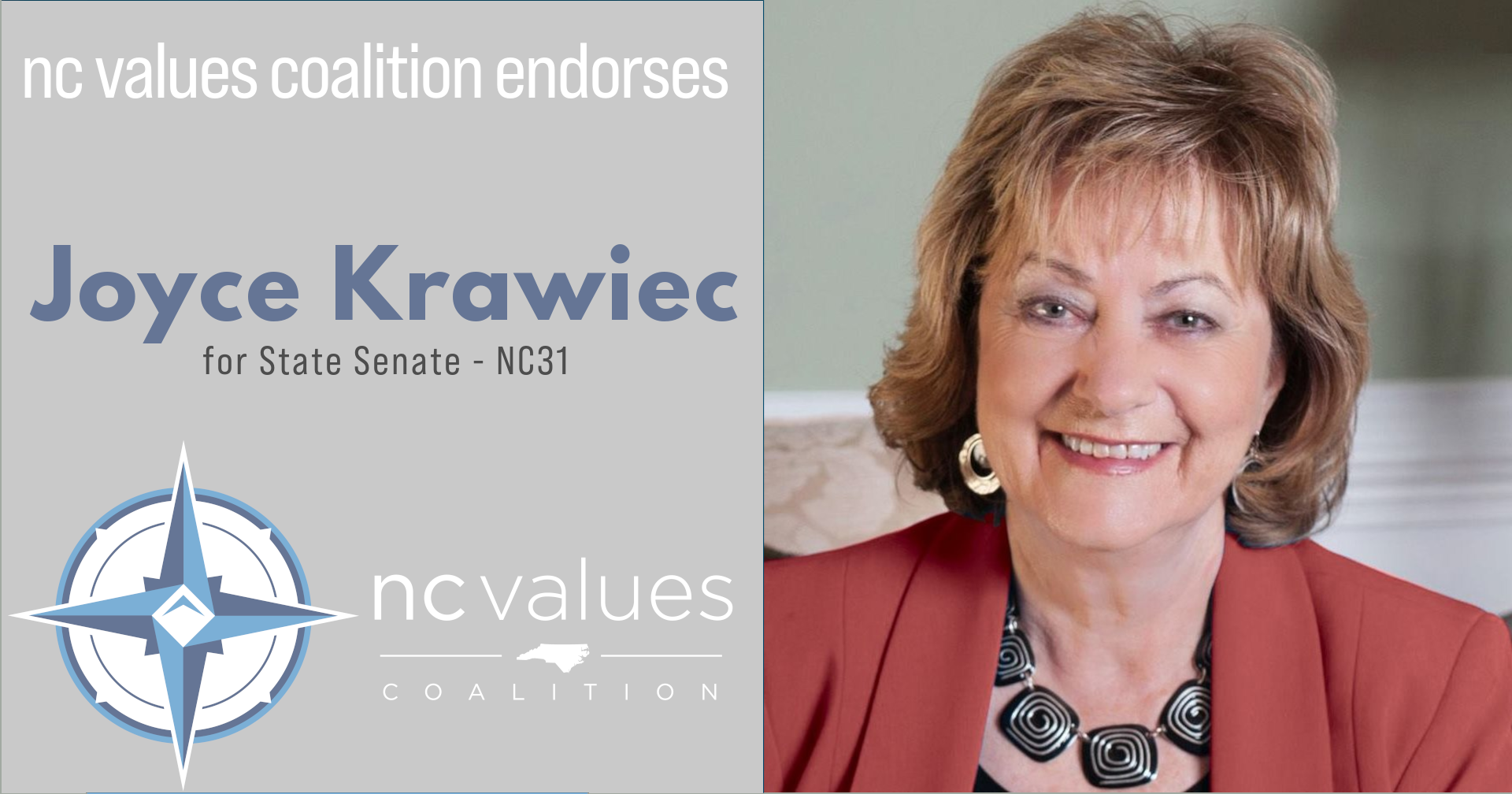 Joyce Krawiec is a hero in the pro-life movement in North Carolina!  She sponsored the Born-Alive Abortion Survivor's Act last year and received our Legislator of the Year Award for it!  That's why we're proud to announce that the NC Values Coalition wholeheartedly endorses Joyce Krawiec in her re-election bid for State Senate District 31!

During Joyce's 6-year tenure in the State Senate, she has been primary sponsor of every pro-life bill that has been filed.  I've watched her handle personal attacks, derogatory press, and unnerving stress with grace, firm resolve, and kindness. She is known for her compassion and her ability to work with others, and her Christian faith motivates her work. She's one of a kind, and we need her to remain in the State Senate.

In addition to pro-life issues, Joyce has championed other conservative measures in the Senate:

Joyce's opponent is a Wake Forest University Administrator who moved into the district shortly before she filed for office.  She's an extreme liberal who was obviously recruited to run against Joyce by the abortion industry, because she's been endorsed by almost every big abortion group in the country-Planned Parenthood, Emily's List, and Lillian's List!

Joyce's opponent, Terri Legrand, was also recently endorsed by Barak Obama, one of only 10 North Carolina candidates to receive his endorsement.  Terri Legrand was endorsed by the Human Rights Campaign-the LGBT activist group that bullied North Carolina about its law protecting women and girls from having men in their bathrooms and locker rooms.  She's also been endorsed by the teachers' union-NCAE, Moms Demand Action-an anti-gun group, and a labor union-the AFLCIO.  All-in-all, Legrand has been endorsed by 23 ultra-liberal groups plus the ultra-liberal Sheriff of Forsyth County.  Wow!  She's a who's who of extreme progressives.  Joyce's opponent recently disclosed that she even supports defunding the police as well!

Joyce's voting record received a score of 100% from the National Federation of Independent Business, Grassroots North Carolina, and the North Carolina Values Coalition.  She also received a 91% from the American Conservative Union.  She was also endorsed by the NC Troopers Association, NC Benevolent Association, and the National Federation of Independent Business. I think you can see that she's a solid conservative through and through.

Joyce's district, Senate District 31, covers most of Forsyth County, and all of Davie County, but her importance to the entire state is undisputed.  We need her to stay in the State Senate to continue championing pro-life and other conservative legislation and to help maintain a conservative majority in the Senate. We hope you will help Joyce in any way you can, because she has a target on her back from the abortion industry, which is pumping out-of-state money into her opponent's campaign from all over the country.

As you can see, it is important to make sure that the #1 champion for pro-life legislation in the State Senate remains in her seat, instead of allowing an avowed abortion, anti-law-and-order, LGBT activist to edge her out. That is why the North Carolina Values Coalition is proud to endorse Joyce Krawiec in her campaign for re-election as State Senator, District 31. She has a proven track record and a reputation for being 100% conservative, standing firm on principle, and working hard for the people of North Carolina. She shares the values our Coalition works hard to advance.