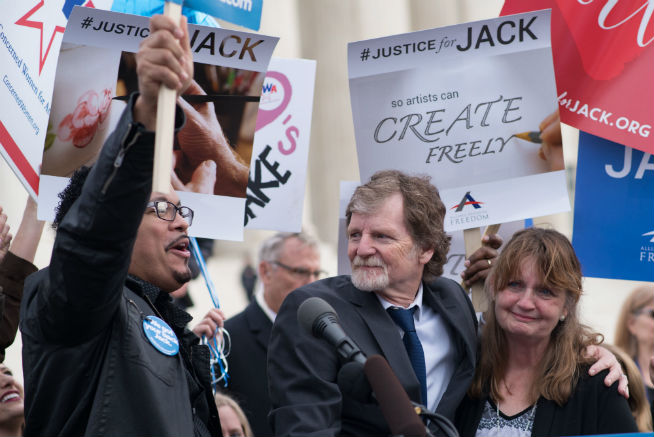 Supreme Court observers have waited breathlessly – all eyes on Justice Kennedy – to hear the fate of Masterpiece Cakeshop owner Jack Phillips, who declined to custom design a wedding cake for two men. Finally we have the good news that, ironically, it is Justice Kennedy who wrote the opinion granting Jack victory. Startling perhaps, but Kennedy is radically libertarian. And while he has touted the right of gay persons to "express and define their identity," now he acknowledges that people of faith have comparable rights. In light of growing cultural hostility to religion, it is impossible to understate the importance of this victory.

North Carolina Values Coalition filed an amicus brief supporting Jack. In a nutshell, we argued that in its treatment of Jack Phillips and his religious faith, the Colorado Civil Rights Commission trashed the very values the LGBT community cherishes—tolerance, diversity, inclusion, equality. The Court's opinion, grounded primarily in the Free Exercise Clause of the First Amendment—rather than Jack's equally viable Free Speech claim—echoes these themes. The government must tolerate a variety of viewpoints and treat all citizens equally.

Tolerance. Justice Kennedy explained that "the Commission’s consideration of Phillips’ case was neither tolerant nor respectful of Phillips’ religious beliefs." Commissioners expressed active hostility toward Jack's religious beliefs, contrary to the command of the Constitution. One of them brazenly equated religious freedom with the discrimination displayed through slavery and the holocaust, declaring that "it is one of the most despicable pieces of rhetoric that people can use to—to use their religion to hurt others.”

Diversity. The Court reaffirmed its longstanding precedent that no government official may “prescribe what shall be orthodox in politics, nationalism, religion, or other matters of opinion,” West Virginia Bd. of Ed. v. Barnette, 319 U. S. 624, 642 (1943). As Justice Gorsuch, the "new kid on the block," phrased it: "In this country, the place of secular officials isn’t to sit in judgment of religious beliefs, but only to protect their free exercise." By remaining neutral and protecting the liberty of all citizens, the government facilitates diversity. The Colorado Commission applied state law so as to coerce uniformity of speech, belief, and action—the antithesis of diversity.

Inclusion. We argued that by crushing dissent, the Commission promoted exclusion of religious persons from the public square—the very opposition of inclusion, diversity's twin virtue. The expansion of anti-discrimination laws—more people, more place—has triggered legal complications. As Justice Gorsuch noted, "it is in protecting unpopular religious beliefs that we prove this country's commitment to serving as a refuge for religious freedom."

Equality. The Court stressed that Jack was entitled to "neutral and respectful consideration" of his faith. The Commission did not deliver. Yet, as our brief pointed out, it granted three other bakers the right to decline cakes expressing disapproval of homosexual unions, because commissioners judged those messages offensive. The Court condemned this glaring inequality. On the one hand, "gay persons and gay couples cannot be treated as social outcasts or as inferior in dignity and worth" but at the same time, "the religious and philosophical objections to gay marriage are protected views and in some instances protected forms of expression."

What does this mean for North Carolina? The Court did not go so far as to strike down all anti-discrimination laws protecting LGBT persons. On the contrary, it affirmed the legitimacy of such laws—but with the caveat that "there are no doubt innumerable goods and services that no one could argue implicate the First Amendment." It was the application of Colorado's anti-discrimination law that troubled the Justices—the hostility to religious beliefs the government must not judge as illegitimate. Although gender identity was nowhere mentioned, the Court's strong validation of religious liberty offers the hope of protection for religious organizations, business owners, and others who hold religious objections to redefining male and female.

The battle is not over, but Masterpiece Gospel is a key victory for religious freedom and certainly one of the most important Supreme Court cases of our time.