"All indicators point to the state’s economy as one of the healthiest and one of the most business-friendly states in the nation. Not one company has left North Carolina because of HB2. In fact, it’s just the opposite, Bank of America, Apple, Google, Corning, CSX, Lance, LendingTree, Pepsi, Yokohama Tire, Braeburn Pharmaceuticals are among hundreds of businesses that expanded, moved or reinvested in their operations here despite some of their CEOs voicing angst over HB2. The AP's 12-year estimate equates to tiny fraction of North Carolina's estimated GDP of 6.8 Trillion over the next 12 years" - Tami Fitzgerald, NC Values Coalition Executive Director.

(Raleigh) Despite dire predictions, one year after HB2 passed, the sky has not fallen and North Carolina remains a regional and national powerhouse. With a projected half-billion surplus and record-setting hotel occupancy and tourism, Governor Cooper and Democratic lawmakers remain committed to their script that HB2 is hurting the economy. That is a bit ironic and hypocritical, because it was Roy Cooper who was caught red-handed last spring recruiting CEO’s in Silicon Valley to boycott North Carolina and smear its reputation. Indeed, nearly all news reports advance his micro-economic narrative without considering all the facts.

“If you look at the most extreme instances of economic impact, by the media and by the universities and the people who come out and say ‘This is the impact,’ that most extreme impact equates to one-tenth of 1 percent of our annual GDP,” said Lt Gov. Dan Forest. He shared these comments while testifying at a Texas Senate hearing. 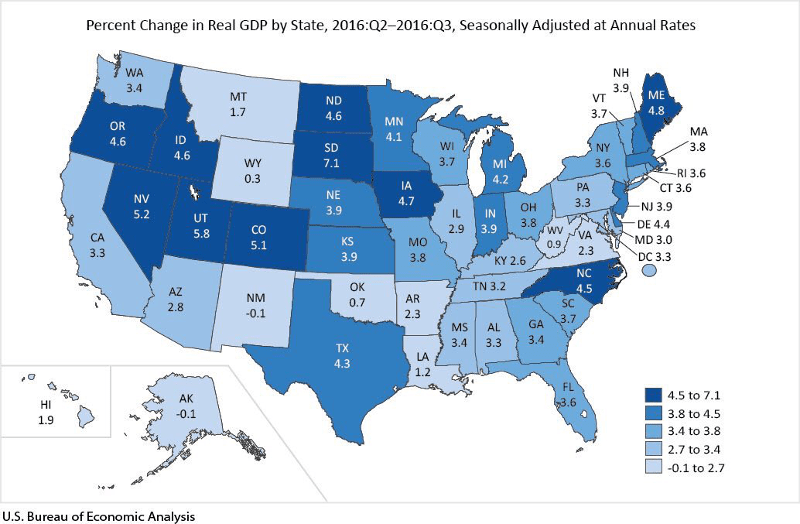 Fact Check: Dan Forest is right! North Carolina’s economy and population is BOOMING and unemployment rates remaining unchanged from a year ago, HB2 has had no substantial economic impact here. All indicators point to the state’s economy as one of the healthiest in the nation! Just look at the rankings we have earned by the country’s leading business indicators:

Indicators across the state point to a promising trendline: When recognizing North Carolina 4th Best for new and expanded corporate facilities this month, Site Selection Magazine again cited capital investors’ very favorable outlook on the State’s workforce, climate and transportation and regulatory climates. In 2016, Wake County recorded the highest number of single family homes sold since 1994, and Charlotte’s Uptown continues to boom with five new hotels, eight mixed use towers, and four office towers under construction in addition to a massive $683 million Brooklyn Village redevelopment project. According to the just released Triangle Commercial Real Estate Conference the healthy trends in 2016 are poised to continue throughout 2017. All of these positive results are not exactly the bleak economic picture Governor Cooper and the news media like to paint.

Fact Check: Not one company doing business in the State before HB2 has pulled out of North Carolina because of HB2. In fact, it’s just the opposite, Bank of America, Apple, Google, Corning, CSX, Lance, LendingTree, Pepsi, Yokohama Tire, Braeburn Pharmaceuticals and over 289 other businesses expanded or reinvested here despite some of their CEOs voicing angsts over HB2. Former Commerce Secretary John Skvarla told the Observer in October, “HB2 hasn’t moved the needle one iota.” He’s right! Even when considering the most outrageous estimates produced by LGBTQ advocates, or the AP's 3.7 Billion 12-year impact, the harm to NC’s economy has been less than .001 percent of our annual $550B economy.

HB2 is about privacy and safety. It is about ensuring that when your daughter, or your wife enter a bathroom, locker room or changing facility owned and operated by taxpayers, she can feel confident that her privacy and safety will not be violated, because biological men and sexual predators don’t have a legal right to access to those private spaces.

HB2 is also about promoting business and reducing regulations by assuring statewide consistency in laws relating to employment, contracting, and public accommodations. Historically the State, not cities and counties, has preferred to set laws related to commerce and public places, and a High Point University poll in February found 80% of state residents prefer this uniform approach.

When North Carolina passed HB2, it aligned itself with nondiscrimination laws in 28 other states and the federal government, hardly a bizarre or uncommon policy. More importantly, HB2 repealed a dangerous City of Charlotte ordinance mandating all private and public bathrooms and other private facilities like locker rooms and showers be opened to members of the opposite sex based on how an individual “identifies” their own sex. The now repealed Charlotte ordinance also halted overregulation of private businesses that would have caused frivolous lawsuits and violated conscience.

Multi-million dollar non-profit organizations like the NBA, the NCAA, and the ACC have tried to coerce North Carolina lawmakers to repeal HB2 by relocating games and threats of future boycotts to levy economic harm. These practices are questionable from a legal standpoint for nonprofits and end up hurting local athletes and sports fans. Apparently, their policy, as well as Governor Roy Cooper’s, would be to allow grown men to shower and use the bathroom with little girls and to force private business owners to choose between their family’s livelihoods or following their conscience.  Shame on them!

Disrupters and dissenters are still refusing to grapple with the reality that HB2 is law, much like those who refuse to accept Donald Trump as President. The economic success of North Carolina and the privacy, safety and conscience concerns of North Carolinians should make us all glad that our leaders are standing strongly behind HB2.  They should also make us question why Governor Cooper, the mainstream press, and sports organizations like the NCAA are still calling for a repeal of a common-sense, law most North Carolinas strongly support.

Contact your legislator, and tell them to NOT to repeal HB2, and NOT to cave to political correctness!