Executive Director of North Carolina Values Coalition Tami Fitzgerald made a statement today regarding the Supreme Court's decision in the Dobbs vs. Jackson Whole Women’s Health:

“This is a major victory for unborn children and their mothers. Lives are now being protected in Mississippi and in other states around the country as a result of the Supreme Court’s decision. In North Carolina, our work is only beginning. Our laws should recognize that life is a human right. Because of modern medicine and science, we now know that unborn babies have a heartbeat at about six weeks, and by fifteen weeks they have fully formed noses, lips and eyebrows, suck their thumbs, and they feel pain. It is time for the law to catch up with the science and modernize our laws.

“Our lawmakers now have an opportunity to protect lives and ensure women and families are supported. Members of our General Assembly in particular must ensure that unborn children and their mothers are protected from the gruesome reality of abortion, and that they receive the care and resources they need to flourish.

“Democrats in our state legislature introduced a bill that supports abortion on-demand up until the moment of birth. These same politicians support taxpayer funding of abortion and even infanticide. They are way out of step with the North Carolina people, who support severely limiting abortion because they recognize that life is a human right.

"The U.S. is one of eight countries allowing abortion beyond 20 weeks. The U.S. and Netherlands are the only nations which rely on viability as a standard for abortion law. It’s high time to end the tragic abortion policy that puts us on par with China and North Korea.

“Now the decision will be up to the states instead of distant, unelected judges. This is an opportunity for North Carolina voters to elect pro-life legislators and a pro-life Supreme Court, so we can secure a veto-proof vote on pro-life legislation and make sure an activist Court doesn’t legislate abortion on demand. It’s time our state recognized the humanity of the unborn, and the North Carolina Values Coalition will be leading the charge to help make that happen in this state.” 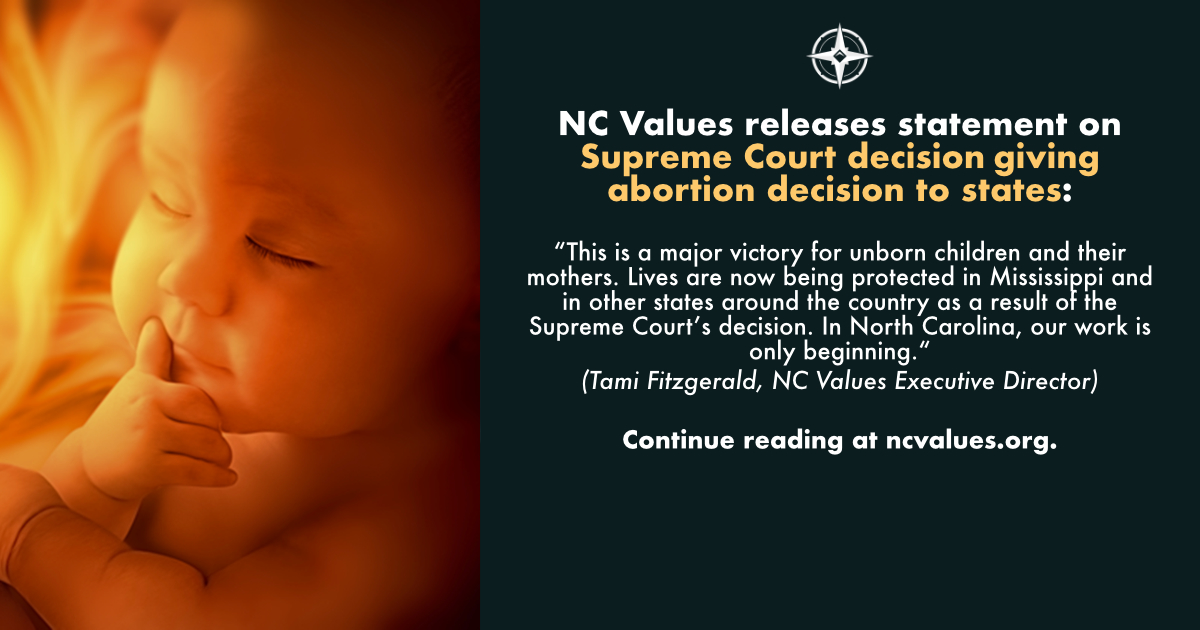