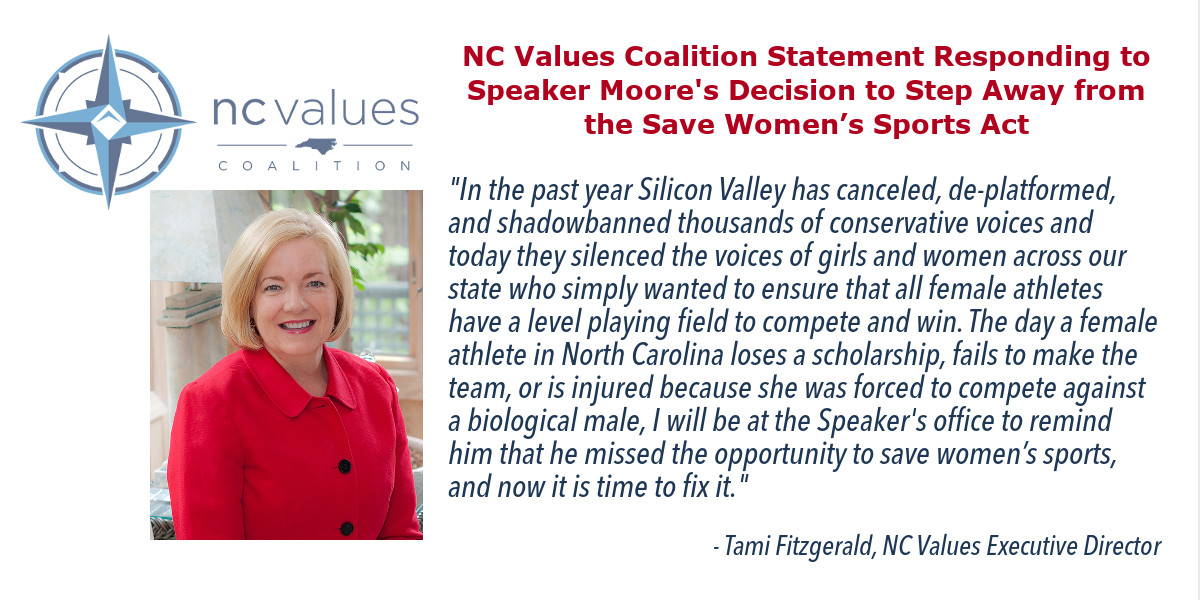 During this legislative session, NC Values Coalition has been at the forefront of legislation that protects Life, Religious Liberty, and Family Values. It's been our honor to work with leaders such as the "Save Women's Sports" bill sponsors Representatives Mark Brody, Pat McElraft, Jimmy Dixon and Diane Wheatley. These legislators bravely worked to protect women and girls in our state from unfair competition in sports. Please join us in thanking them for their courage and true leadership on issues like this that are difficult and often face media blackout.

Today, the Speaker of the House, Rep. Tim Moore, announced to the press that he has killed the Save Women’s Sports bill—House Bill 358. This bill would prohibit biological males who identify as female from participating on girls’ and women’s sports teams in middle school, high school, and college. More than three-fourths of North Carolinians agree that allowing biological males to compete in women’s sports is unfair. Although we were the 30th out of 32 states to file similar legislation, our leadership still seems to think that no problem truly exists.

Speaker Tim Moore told the newspapers that the Save Women’s Sports bill was “a solution in search of a problem that hasn't yet surfaced in North Carolina as in other states.” We disagree. Almost two years ago, in May of 2019, the North Carolina High School Athletic Association, which controls high school athletics in all public schools in North Carolina, adopted a new rule that allows participation in sports on the basis of a student’s “gender identity” in addition to their biological sex.

All the student has to do to compete on teams of the sex opposite their biological sex is fill out a form and submit it to the High School Athletic Association. The rule went into effect in the fall of 2019, but high school athletics were interrupted by COVID-19 for almost a year. In only about 7 short months of active competition, the High School Athletic Association has had somewhere around 10 applications submitted. The fact that high school athletes are utilizing the new rule to compete on the team opposite their biological sex means the problem is real. The numbers are sure to increase as high schools get back to school and sports resume. We shouldn’t have to wait until girls are beaten out of medals and scholarships or physically hurt by biological males before we solve the problem.

Just look at Connecticut where for two years in a row, the fastest Connecticut high school girls were defeated at the State Championship track meet by two biological males whose times would have failed to qualify them to compete at the boys’ state finals. Since 2017, those two male athletes have taken 15 Connecticut State Championship titles away from girls. Also telling is the fact that in 2018, 275 United States high school boys ran faster on 783 occasions than the lifetime best time of the World Champion Olympic female sprinter Allyson Felix.

It’s just common sense that male athletes are bigger, stronger, and faster than female athletes. That’s why Title IX was passed—to give women equal opportunities in sports. But what is happening is a repeal of Title IX by the actions of high school athletic associations and the NCAA when they allow males to compete on female athletic teams.

Just two weeks ago, the House Judiciary 1 Committee held a hearing on the Save Women’s Sports bill. We assisted the bill sponsors in bringing top experts in to testify on behalf of the bill to the committee. 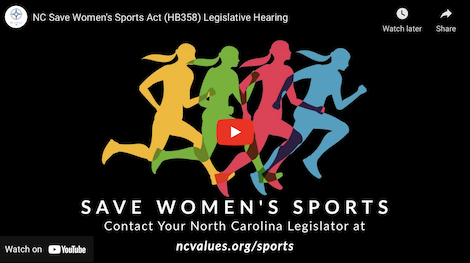 (Watch for yourself as they tell the story.)

The bill should have received a vote at that hearing, as it would have surely passed the Committee and then the House. Republican leadership never gave it a chance.

The irony is that the Save Women’s Sports bill passed last year in Idaho and this year in numerous other states— Mississippi, Arkansas, Tennessee, Alabama, and West Virginia. Governors in Montana and Florida are expected to sign it into law in those states as well, and it’s passed one chamber in Minnesota and New Jersey and is now being advanced in the other chamber. North Carolina should be included in this national movement to protect women’s sports!

The failure of our state’s top leaders to act on this injustice for girls is partially due to Governor Cooper’s alignment with LGBT activists. He would surely veto such a bill because he wholeheartedly supports LGBT issues. It’s also partially due to the press being so one-sidedly biased in favor of LGBT issues. There are virtually no mainstream press outlets in North Carolina that report on this bill in a fair way, or which will actually tell the stories of the real girls and women who are being harmed by biological male athletes competing on their teams. It’s also a lack of support from corporate interests in our state. On Monday, the Governor, Senator Berger, and Speaker Moore made the announcement that Apple is bringing one of the biggest corporate deals to our state ever—a $1 billion research and development center. That same day, Speaker Moore moved the Save Women’s Sports bill to the Rules Committee, where bills that aren’t going anywhere get shoved aside.

As always, let's make sure we are praying daily for our leaders. They need God's wisdom, power, courage, and strength, just as we do. We worship a mighty God who has the power to change hearts and minds, and we lean on Him as we continue to fight for the values we hold dear.

Charles Walkup Jr commented on PRESS RELEASE: Pray for True Conservative Leaders in NC 2021-04-30 21:13:47 -0400
Here’s a bill we need to get legislators to offer:
Individual perception can never be a basis for law, because that is government favoring one person’s/group’s perception over others. That is intrinsically showing partiality; that is unjust. That is “government” discrimination. Gender identity is based solely on individual perception, therefore it cannot be used as a basis for laws. Laws must be based in reality, not perception. Sex (male/female) is not “assigned” at birth; it is observed at birth.
Such a bill would address all bills involving perception rather than reality.