"In defiance of the Governor, churches across the state held services on Mother's Day weekend to demonstrate they are capable of exercising the same social distancing and safety guidelines as retail businesses. Lt. Governor Dan Forest, leaders in the General Assembly, and the members of the Council of State join in with NC Values Coalition to call on Governor Cooper to correct his government overreach that targets churches and the free exercise of religious beliefs. As Virginia and South Carolina Governors implement plans to allow indoor worship services, Governor Roy Cooper continues to consider religious services as non-essential and prohibit indoor services greater than 10 people.

Telling churches they can only worship together outside, while not placing those same restrictions on other businesses is an undue burden on religious freedom and is unconstitutional. Instructing communities that no more than 10 people can attend a church service yet allowing up to 50 individuals to attend a funeral in that same building is discrimination. If retail businesses can allow up to 50% of their fire capacity into their store, churches should be given the option to follow the same guidelines." 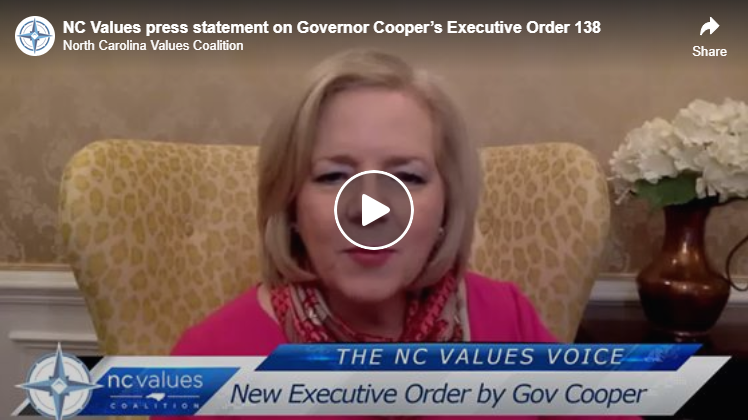 Up to this point, it has been clear that safeguarding the public health required us to not meet together for church services.  But, now that North Carolina is beginning a tepid reopening, it appears that churches are left outside (literally).  That's why I wanted to let you know about Governor Cooper's latest Executive Order, beginning Phase 1 of the reopening of North Carolina, and how it applies to churches.

Under the current Stay-At-Home order, almost all retail businesses are allowed to reopen using specified social distancing and health measures up to 50% of their capacity for customers under the fire code. Churches, however, must continue to be shut down.  Here's what the order says that affects churches:

Very sneaky!  During his press conference about the order, Governor Cooper interpreted this vague language to mean that churches can only meet for worship if it is done outdoors.

The U.S. Supreme Court has ruled that only if the governmental interest is "compelling" and if no alternative, less restrictive forms of regulation would serve that interest is the government allowed to burden (regulate) religious exercise.  While the State most certainly has a compelling interest in stopping the spread of COVID-19, and none of us wants to play down the health risks at stake here, there are alternative, less restrictive forms of regulation that would serve the State's interest—the social distancing and health precautions imposed on businesses.  The problem with Governor Cooper's order is that it singles out churches for different treatment.  When businesses are permitted to open their doors to 50% of their customers because they can be trusted to implement social distancing and health precautions, why can't churches do the same?

Pastors are left wondering whether Governor Cooper's new order, which explicitly states that "mass gatherings" (which are prohibited) do not include gatherings for worship, really means what it says.  They are also left wondering why meeting indoors is prohibited, while businesses are allowed to sell their products indoors.  Finally, they are left wondering if the order allows them to meet indoors when meeting outdoors is “impossible” and who determines what “impossible” means. You see, the language of the order does not match the Governor's interpretation of it, and it is vague and unenforceable.

Please be advised that this email in no way constitutes legal advice.  On Thursday morning, pastors from across the state will hold a press conference outside the General Assembly to announce legal action against Governor Cooper for his inconsistency in closing down churches, while opening up retail businesses.  It is religious discrimination, plain and simple.

We all must exercise good judgment and be aware of how our actions affect others. Loving our neighbor should cause us all to be cautious and to seek not to expose other people to sickness. Last Sunday, hundreds of churches opened their churches in civil disobedience to help our Governor to see that his executive order constitutes religious discrimination.  If businesses can open in a limited way exercising special health precautions, churches should be allowed to do the same.

On this week's episode of the NC Values Voice, Tami Fitzgerald will interview a pastor who held services on Mother's Day weekend in defiance of Governor Cooper's executive order. You can watch the interview at ncvalues.org/voice at 7:30 pm on Wednesday, May 13th.