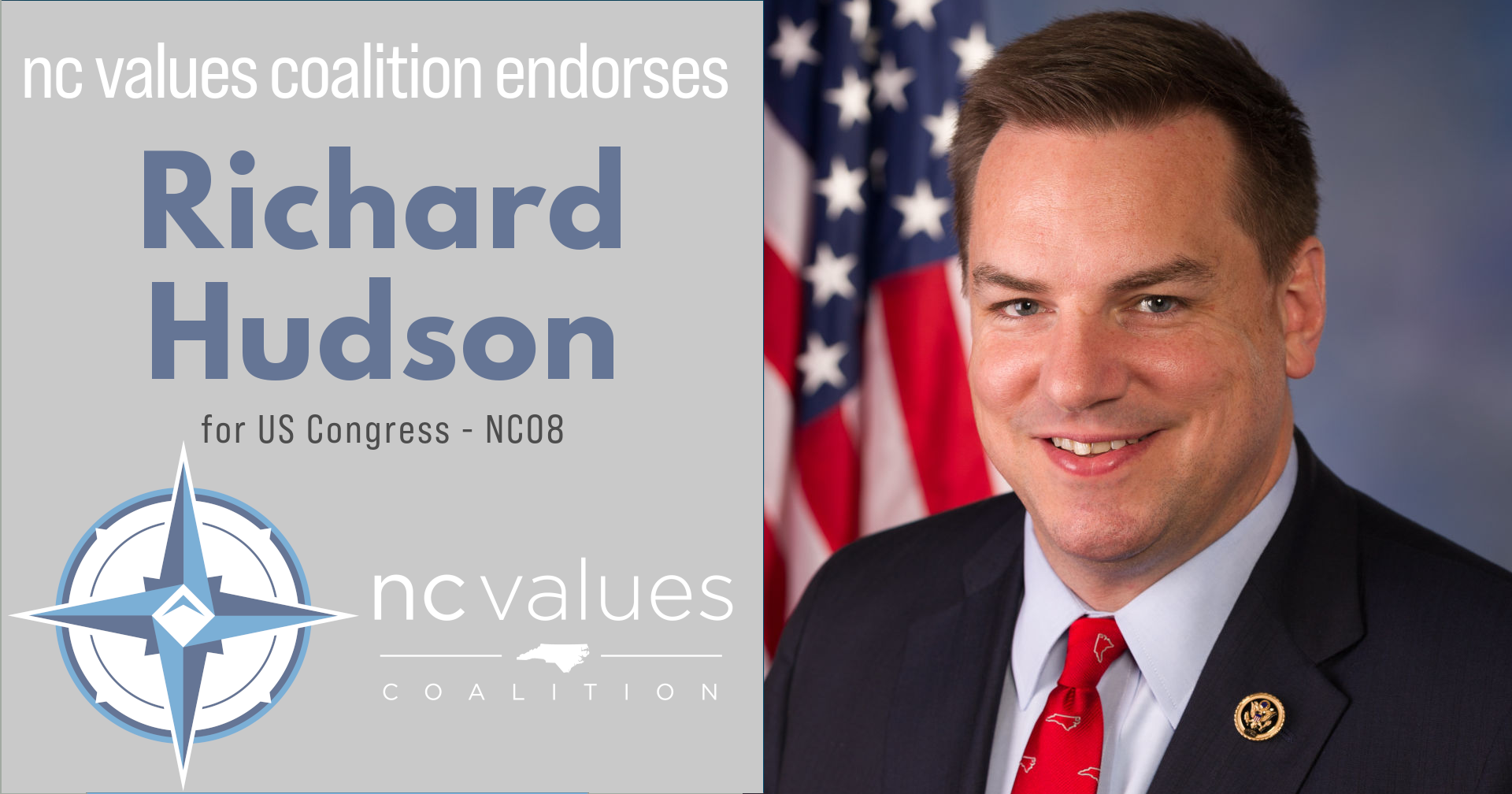 A native of Charlotte, Richard obtained degrees from UNC Charlotte in History and Political Science. Before he was elected to Congress, he worked for Congressman Robin Hayes and served as Chief of Staff for a number of other Congressmen. He has an incredible wife and a 5-year-old son of whom he is very proud.

This year, thanks to liberal groups challenging Congressional districts drawn by the General Assembly, Richard is running in a new district ordered by the Courts that stretches from Concord to the East and now includes most of Fayetteville. Because of Democrat challenges to Congressional Districts, he is running in his third new district. Richard's margin of victory has decreased every election for the past two elections, because of the court-ordered redistricting. This race is now considered the most competitive race in North Carolina for Congress.

The best way to determine whether a Congressman is conservative is to look at how he or she votes. Richard Hudson has a 100% voting record from many respected conservative groups, including the American Farm Bureau, the Campaign for Working Families, Citizens Against Government Waste, Concerned Women for America, Faith & Freedom Coalition, FRC Action, Gun Owners of America, National Federation of Independent Business, National Right to Life, and Susan B. Anthony List. That gives him high marks! But we know Richard personally to be a man of high integrity, a man of faith, and a leader among his peers. We highly recommend Richard Hudson for your vote if you live in the 8th Congressional District, and we have endorsed him.

Congressman Hudson has been appointed to the prestigious Committee on Energy and Commerce in Congress, where he has done some amazing work. He is fighting for free-market healthcare and to create a robust marketplace for healthcare where costs are driven down by competition, rather than one-size-fits-all government-mandated Obamacare. Congressman Hudson is 100% prolife, and he champions bills like the Pain-Capable 20-week ban on abortion and the Born-Alive Abortion Survivors Act. He is also a strong supporter of the Second Amendment. Richard Hudson has done much to promote the military and look out for the soldiers who serve our country, and he's a strong advocate for Fort Bragg which is in his district and for veterans. Listen to the Voice tonight to hear specific bills he has spearheaded to help military families.

His opponent, Patricia Timmons-Goodson, is one of the most radical liberals running for Congress. She sat on the State Supreme Court for 6 years, having been appointed by former Governor Mike Easley, and she was nominated to the Federal District Court bench by former President Barak Obama, but never confirmed. She's been endorsed by pro-abortion groups Emily's List, Planned Parenthood, NARAL/Pro-Choice, and the National Organization for Women. Patricia Timmons-Goodson is also been endorsed by LGBT activist groups Equality NC and the Human Rights Campaign. All-in-all, Patricia Timmons-Goodson has over 30 ultra-liberal endorsements, including Barak Obama, Joe Biden, and Kamala Harris. Millions of dollars have streamed into the state to support her from California, New York, and other parts of the country. She would have no campaign if it weren't for pro-abortion groups pouring millions of dollars into the State to elect her. She has a reputation for being soft on crime.

It is a great honor for the North Carolina Values Coalition to endorse Congressman Richard Hudson for re-election to Congress in the 8th District. We hope you will remember him when you go to vote!