They just dug in their heels...

Mayor Roberts and the Charlotte City Council just dug in their heels.

Governor McCrory and legislative leaders were willing to do a "reset" and go back to how things were before Charlotte passed a radical LGBT-pleasing agenda. Mayor Roberts responded by standing outside the Charlotte Government complex with leaders of Equality NC, the Human Rights Campaign, and transgender groups to make the announcement, making it appear that she works for the LGBT groups instead of the citizens of Charlotte.

Governor McCrory and the General Assembly have stood strong on HB 2 and on protecting the privacy and safety of our families. But they're being tarred and feathered for standing up for principle. Mayor Jennifer Roberts, on the other hand, was unreasonable in insisting on her unconstitutional ordinance that furthers the LGBT agenda at the expense of our children.

Tell them thank you in person for protecting the privacy and safety of our families!

We are calling all of you to stand strong with us by supporting our Governor, Lt. Governor, and legislators at our Carolina Values Summit breakfast.

Get Your Carolina Values Summit Tickets

And now, the mainstream media, that has been in the pocket of Jennifer Roberts and Roy Cooper, has started to pick off some of the legislators who voted to protect your privacy and safety. A few are now calling for repeal of HB2, even though the majority of them continue to stand strong while NCAA, ACC and big business stand with these Roy Cooper and Mayor Roberts in an attempt to take down our state. Folks, we need make sure we support those who have stood strong for our privacy rights and our safety.

When we heard about what was happening, we asked you to contact your legislators. You helped send over 150,000 phone calls and emails. Amazing! We now need you to come in person to Raleigh on October 13th to join Franklin Graham at the State Capital at noon that day and to join our state leaders for breakfast at our Carolina Values Summit that morning.

In every state where Franklin Graham has held his Decision America tour, thousands of people have shown up to stand for Biblical values. Raleigh is the last state capital for his tour, and we should have the most people of any State—not only because it is Franklin Graham’s home state, but also because our leaders have stood strong in the face of adversity. These two gatherings will be our expression of support for the courage and conviction our leaders have shown.

"Schroeder, a George W. Bush appointee to the United States District Court for the Middle District of North Carolina, ruled two transgender students and a transgender employee "are likely to succeed" in their challenge of H.B. 2's bathroom use provision because that provision violates Title IX of the 1972 federal Education Amendments, as interpreted by the Obama administration.

The relevant precedent in the UNC case, Schroeder wrote in an 83-page opinion, is the Fourth U.S. Circuit Court of Appeals' April ruling that a transgender high school student in Virginia is entitled to use restrooms and other facilities corresponding to her gender identity. The Fourth Circuit ruled, Schroeder stated, that "controlling weight" should be given to the Department of Education's interpretation of "sex discrimination" in Title IX as including gender identity discrimination."

While the media has presented the decision as a victory for anti-HB2 proponents, HB2 remains in effect for all others at UNC and across the state. The irony of the decision is how little impact it would even have, given UNC has alleged some sovereignty to ignore state law. (Read more)

2. Two of the nations leading mental health scholars release 143 page report that surveys 200 peer-reviewed studies and argues most of the common claims heard about sexuality and gender are not supported by science.

"The belief that sexual orientation is an innate, biologically fixed human property—that people are ‘born that way’—is not supported by scientific evidence.

Likewise, the belief that gender identity is an innate, fixed human property independent of biological sex—so that a person might be a ‘man trapped in a woman’s body’ or ‘a woman trapped in a man’s body’—is not supported by scientific evidence." (Read more)

3. Texas and a dozen others states file brief in NC cases arguing in favor of HB2 and against the Obama administration's involvement.

The states also argue the North Carolina proceedings should be halted temporarily because of that ruling and a Virginia case that the U.S. Supreme Court may hear.

So, in a fallen world, faced with the painful choice of choosing between the lesser evil (Donald Trump) vs. the greater evil (Hillary Clinton), I believe I have a moral obligation to vote for the lesser evil. Otherwise, I become morally culpable for the greater evil prevailing. Some Evangelicals have said, "If I voted for Donald Trump, I would have to apologize to Bill Clinton." Frankly, I feel that if I didn't vote for Donald Trump in order to defeat Hillary Clinton, I would have to apologize to Jesus.

We have all heard "don't let the perfect be the enemy of the good." Just so, we should not let the bad be the friend of the worst. In other words, don't let a flawed candidate deter us from opposing the much worse opponent." (Read more) 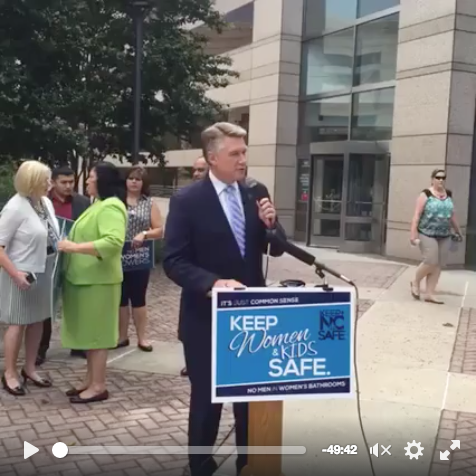 "While HB2 has many saying no to North Carolina, one religious group is saying yes.

'In spite of the negative attention north Carolina has received surrounding HB2, the leaders stood in solidarity as we spoke of the spiritual and the economic impact of aim conference in our city,' Bishop-Designate Dr. Michael Anthony Stevens said."

"'We will not compromise our values nor will we be bullied into a position that we do not agree with to allow men to have access to our women's bathrooms,' Auxiliary Bishop for North Carolina Patrick Lane Wooden Sr." (Read more) 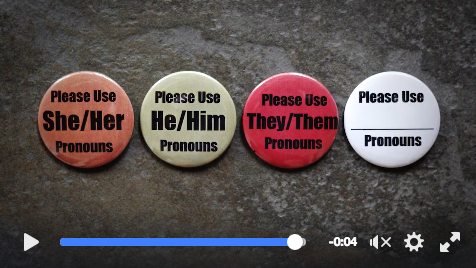 "Faced with intense opposition from religious colleges in California, a state Senator said Wednesday he has decided to amend a bill by dropping a provision that would have allowed gay and transgender students to more easily sue private universities for discrimination if they are disciplined for violating church teachings." (Read more)