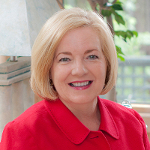 Tami Fitzgerald, NC Values' Executive Director, has spent a lifetime serving and protecting pro-life, pro-family, and pro-religious liberty values. Whether it is through 22+ years of legal work across three states, or serving as the chairwoman of the successful NC marriage amendment, Tami has sought to protect the type of values conducive to a healthy and flourishing society.

Nearly 10 years ago, Tami was moved by the risks posed against the causes of life, family, and liberty by increasingly aggressive liberal activists and an attitude of political correctness. In response, she felt called to create a non-profit organization known as the North Carolina Values Coalition. The coalition was established with the goal of influencing elections by electing pro-life, pro-family, and pro-religious liberty candidates. Since its inception, Tami and the NC Values Coalition have been on the front lines of North Carolina's major social and political battles.

Some of Tami's additional experience includes:

Tami lives in Raleigh with her husband Craig, is the mother of two, and the grandmother of four.

Jerry Grantham commented on Tami Fitzgerald 2020-03-03 14:47:33 -0500
Tami I need a sample resolution apposing abortion which can adapt to present at our Wayne County Republican Convention on Saturday.
Thank you, Jerry B Grantham, Sr 919-705-4991
jbgranthamsr@reagan.com

Common Sense commented on Tami Fitzgerald 2019-08-03 20:20:03 -0400
Torture is not part of the first amendment, you are worthless scum and your opinion is beyond irrelevant. Grow up.

Holly Hajduk commented on Tami Fitzgerald 2018-04-15 14:45:30 -0400
You can say or do whatever you want. Gays, lesbians, and transgender will exist. Kids will have sex.
I am a Christian woman who knows God is inclusive.