You might assume that perhaps the cartoonist was ignorant of the context that would make the comic so inappropriate. However, we discovered that the cartoonist, Dennis Draughon, is actually also a public middle school social studies teacher! Someone who teaches social studies for a living cannot feign ignorance here. If anything, it makes it even more disgusting.

To really understand how insulting it is, you just gotta see it for yourself: 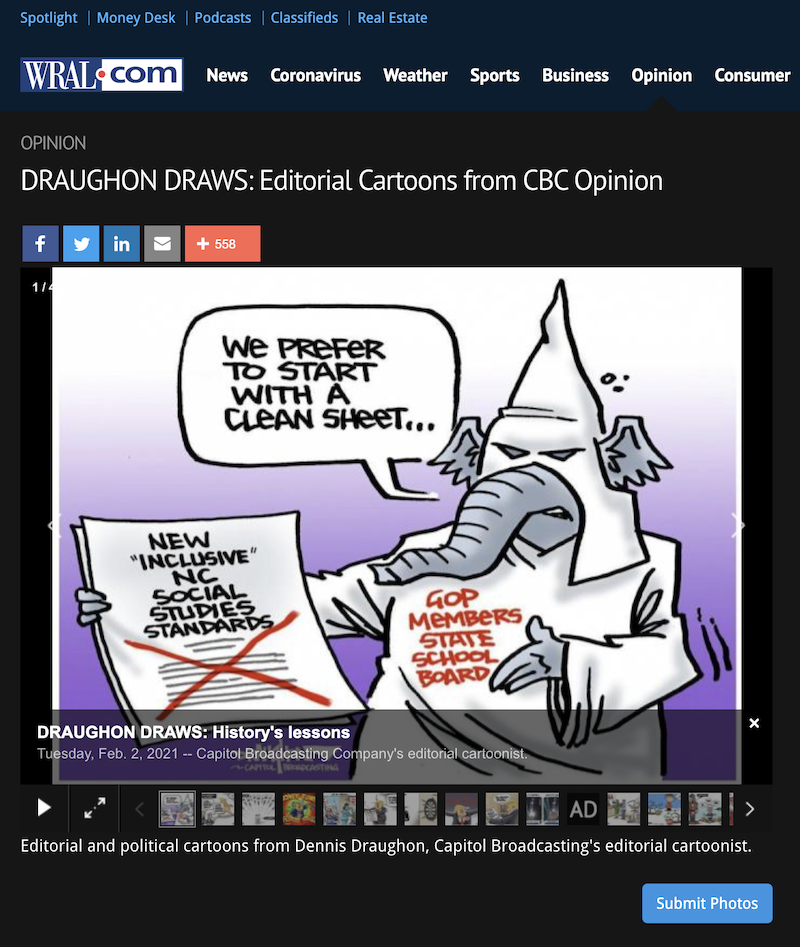 Soon after the cartoon's release, Lt. Governor Mark Robinson—one of the major critics of the divisive and radical Social Studies Standards revisions—released this statement:

"Earlier today WRAL published a cartoon. . . This cartoon attacks all Republican members of the State Board of Education including the first black lieutenant governor of NC, and a Lumbee board member, Olivia Oxendine. This cartoon was published just two days into Black History Month." (Lt. Gov. Mark Robinson)

It's truly unbelievable how insulting and inappropriate the cartoon is. Unfortunately, tactics like this have become increasingly common among the far-left. Whether you're an elderly florist, or a cake baker, or even our Lt. Governor,  opposing the far-left's political values means you're now somehow a bigot and a racist. It doesn't matter whether you're discussing gender, sex, economics, bathroom privacy, drag queen story hours, transgender unicorns, or public school education standards. It doesn't even matter what your race, sex, religion, or even argument are. The more emboldened the radical left becomes, the more they accuse their opponents of bigotry and racism simply for disagreeing with their radical ideology.

As seen in the cartoon, it has even gotten to the point of absurdity. How else can you get away with publishing a cartoon accusing the first black Lt. Governor of NC of being a hood-wearing klansman during the second day of Black History month?

And ICYMI, what was the Lt. Governor's crime? He dared to show up to a meeting to discuss education standards revisions—a meeting, mind you, that the Board scheduled in a manner to get Robinson not to attend—and argue that the standards were being politically weaponized to indoctrinate kids with a particular far-left ideology.

We need to push back against their bigoted bullying and send a message. Otherwise, it will only get worse!

Since yesterday, nearly 2,000 of you used our click-to-contact tool to easily send tens of thousands of emails to members of the School Board asking them to OPPOSE the divisive Social Studies Standards revisions.

If you haven't already done so, would you considering helping us stand with Lt. Gov. Mark Robinson against K-12 indoctrination by using this tool before the NC Board of Education meets on February 4th?