US Senate Fails to Pass Key Protection Acts for Infants

“Our coalition is brokenhearted that there were not enough votes today in the US Senate to pass two common-sense pro-life bills that would end late-term abortions and guarantee prenatal care to infants born alive during a failed abortion. While we commend North Carolina’s two Senators—Richard Burr and Thom Tillis—for voting for these important bills, we still have a Governor in North Carolina who vetoed the same Born Alive Abortion Survivors’ Act last year and supports killing babies in the womb up to and even after birth. Governor Cooper agrees with Democrats in the US Senate who chose infanticide and late-term abortion today instead of compassionate care and life for babies. The team at NC Values Coalition is working hard to inform voters about Governor Cooper’s extreme views on abortion as well as the extreme views of his legislative allies, so those voters can choose life at the ballot box in November.”

Today the U.S. Senate voted on the Pain-Capable Unborn Child Protection Act and the Born-Alive Abortion Survivors Protection Act. These bills would have ended late-term abortion at a point by which research shows babies feel pain, and ensure that infants born alive during failed abortions receive the same medical care afforded children born prematurely at the same age, respectively.

First introduced by Senator Lindsey Graham (R-SC), the Pain-Capable Unborn Child Protection Act would protect unborn children from late-term abortion after five months, more than halfway through pregnancy, a point by which science shows they can feel pain. The bill is known as “Micah’s Law” in honor of Micah Pickering, who was born prematurely at twenty weeks (22 weeks gestation).

The Born-Alive Abortion Survivors Protection Act was first introduced by Senator Ben Sasse (R-NE). In just four states that report on abortion survival rates, at least 25 children were born alive during failed abortions in 2017. Furthermore, the CDC estimates that between 2003 and 2014, at least 143 babies died after surviving failed abortions, and it is very likely that this undercounts the actual number. Earlier this month, the Senate Judiciary Committee held a hearing on this legislation where expert witnesses testified, including Susan B. Anthony List’s National Campaign Chair Jill Stanek and Charlotte Lozier Institute Associate Scholar Robin Pierucci, M.D., M.A.
Science and today’s medical protocol show at five months, children in the womb can feel excruciating pain. Surgeon’s use anesthesia when performing in utero surgery yet our nation allows a child to be terminated to birth. It is past time for the United States to be removed from the list of only six other nations worldwide that allow abortion on demand more than halfway through a pregnancy.

If Senators cannot support a limit on abortion after the point babies feel pain, surely they should be able to support a bill to protect born babies. It sounds hard but babies actually are born alive, because we permit extreme late-term abortions in this country. 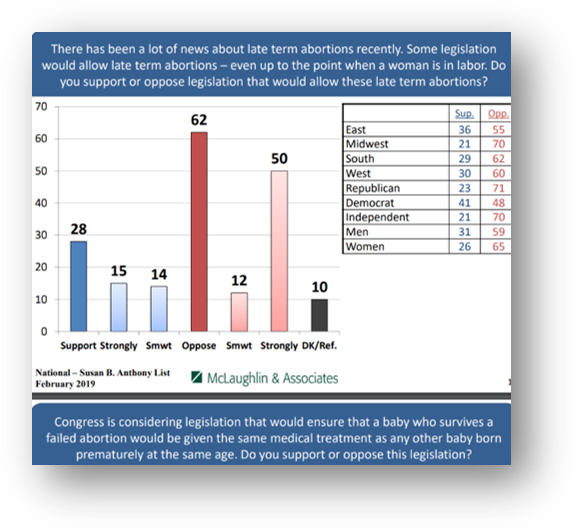 Nationwide poll this month found 77 percent of voters support legislation to protect babies who survive failed abortions. [McLaughlin & Associates conducted the survey of 1,000 likely general election voters nationwide between February 6 and 10, 2019. All interviews were conducted online; survey invitations were distributed randomly within predetermined geographic units. These units were structured to correlate with actual voter turnout nationwide in a general election. The sample of 1,000 likely general election voters has an accuracy of +/- 3.1% at a 95% confidence interval.