What is Melissa Ohden's Testimony?

This bill is vitally important because children do survive abortions and the Born Alive Infants Protection Act signed into law by President Bush in 2002 was a definitions bill that provided no consequence for failing to provide medical care to survivors (1).

There’s limited data on the incidence of children surviving abortions, but in the words of Dr. Willard Cates, former head of the CDC’s Abortion Surveillance group, (quoted in the Philadelphia Inquirer of August 2, 1981): “(Live births) are little known because organized medicine, from fear of public clamor and legal action, treats them more as an embarrassment to be hushed up than a problem to be solved. It’s like turning yourself in to the IRS for an audit. ... The tendency is not to report because there are only negative incentives.” (2)

However, data from the CDC about the incidence of infants surviving abortion gives us an idea of the depth of the issue. As Arina Grossu, MA, formerly of the Family Research Council, testified before Congress, according to the CDC, “between the years 2003 and 2014 there were somewhere between 376 and 588 infant deaths under the medical code P96.4 which keeps track of babies born alive after a “termination of pregnancy” (2).

The CDC concluded that of the 588 babies, 143 were “definitively” born alive after an attempted abortion and they lived from minutes to one or more days, with 48% of the babies living between one to four hours.

It’s important to note that this is an underestimate, because these are just reported numbers from hospitals, not abortion facilities (3). Dr. Kermit Gosnell is only one abortionist who was responsible for "hundreds of snippings" of born-alive babies, yet he did not report even one. His numbers alone exceed the “definitive” numbers of the CDC.

As you can see in the spreadsheet below, in five of those eight states, there were 108 abortion survivors reported in a 12-year-period. 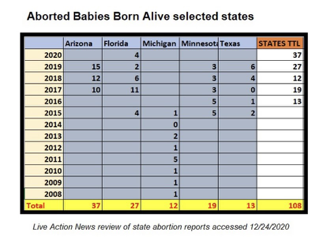 States not included in this spreadsheet have reported the following numbers, as was presented in Congressional testimony by Patrina Mosley, MA, in 2019:

Historically, there have been at least two studies completed on the incidence of failed abortions and surviving children, as reflected in the Dreaded Complication Series by Liz Jeffries and Rick Edmonds, published in the Philadelphia Inquirer, in 1981. One study found life in about 10% of the prostagladin abortions performed at a Hartford, CT, hospital. The other study found 38 survivors in a sample of 150,000 abortion (6).

Even Dr. Cates, CDC Abortion surveillance, stated that there are estimated to be “400-500 live births annually” as a result of failed abortion. (ibid) He is also quoted as saying, “No one is so naïve as to think there is reliable voluntary reporting of live births….” (ibid)

I am an abortion survivor, myself. In August of 1977, my birthmother, as a 19-year-old college student, had a saline infusion abortion forced upon her against her will by her mother, my maternal grandmother.

The saline infusion abortion was the most common abortion procedure performed at the time, which involved injecting a toxic salt solution into the amniotic fluid surrounding me in the womb. The intent of that toxic salt solution was to poison and scald me to death. Typically, that procedure lasts about 72 hours—the child soaks in that toxic solution until their life is effectively ended by it, and then premature labor is induced, expelling the deceased child from the womb. My medical records indicate that I didn’t soak in that saline solution for just three days, but five, while they tried numerous times to induce my birthmother’s labor.

No matter what people believe about abortion in our society, most people agree that what happened to me was horrific. But I also hope that people recognize that what happened to my birth mother during those five days was also horrific. Abortion ends the life of its primary victim—(most of the time), and dramatically impacts the life of the secondary victim—the woman.

Her labor was finally successfully induced on the fifth day, and I was delivered in the final step of that abortion procedure at St, Luke’s Hospital in Sioux City, Iowa. However, instead of being delivered as a successful abortion—a deceased child, I was miraculously born alive.

My medical records actually state “a saline infusion for an abortion was done but was unsuccessful.” They also list out a complication of pregnancy as a “saline infusion.” (7)

I weighed a little less than three pounds, which indicated to the medical professionals that my birth mother was much further along in her pregnancy than the 18-20 weeks pregnant that was estimated in medical records. In fact, a neonatologist remarked that he estimated me to be about 31 weeks gestation. (7)

Whether the abortionist simply estimated wrong the gestation based on my birthmother’s self-reporting, or he was lying in order to proceed with the abortion, we’ll probably never know. What we do know is that when I was delivered alive that day, there was an argument about whether I would be provided medical care. My adoptive parents were told that I was “laid aside,” and that nurses intervened to save my life.

I have now been in contact with a nurse who was working that day in the NICU at St. Luke’s, who confirmed that a “tall, blonde nurse” rushed me in that day, unwilling to follow my grandmother’s orders to leave me to die. Dramatic, yes, I know. But I am far from alone. I never understood how something like this could happen in our world until I began to study reports like The Dreaded Complication series, where story after story is shared of survivors being left to die and yes, even in some circumstances, killed.

I am one of the lucky ones-to not only survive an abortion, but to have someone fight to save me. We know this is not always the case. Look up the testimony of nurse Jill Stanek, in case you haven’t heard of her experience, although there are so many more stories like hers. (8)

In fact, I know I’m not the only survivor from St. Luke’s Hospital. In 2013, I met a former nurse in Omaha, Nebraska, at an event I was speaking at. Overcome with emotion and pleading for my forgiveness, she shared that she was working there in 1975 when a little boy survived a saline infusion abortion like I did. In her words, she “followed [her] superior’s orders,” and “placed him in a bucket of formaldehyde, in the utility closet, to die, and be picked up later as medical waste.” Sadly, she told me this was not an isolated or unknown incident. The fact that I was ultimately provided medical care doesn’t negate the fact that there was initially an argument about whether that should or would happen. And it surely doesn’t negate the fact that other children have faced a far different fate than I did.

Passage of SB 405 will ensure that the fate of survivors like me or the 384 survivors (four in the last two weeks since I testified before this House bill) that we’ve connected with through The Abortion Survivors Network, aren’t left in the hands of their abortionist, (who historically have called survivors a “dreaded complication,” which I believe speaks volumes about how they proceed with care for us) or the “luck of the draw” with which medical professional is working that day.

Thank you for giving SB 405 every consideration.